Tesla previews humanoid robot, but Musk cautions it is not ready just yet [www.bgr.in]

Tesla's robot is a real robot now, not just a guy in a suit • TechCrunch [techcrunch.com] 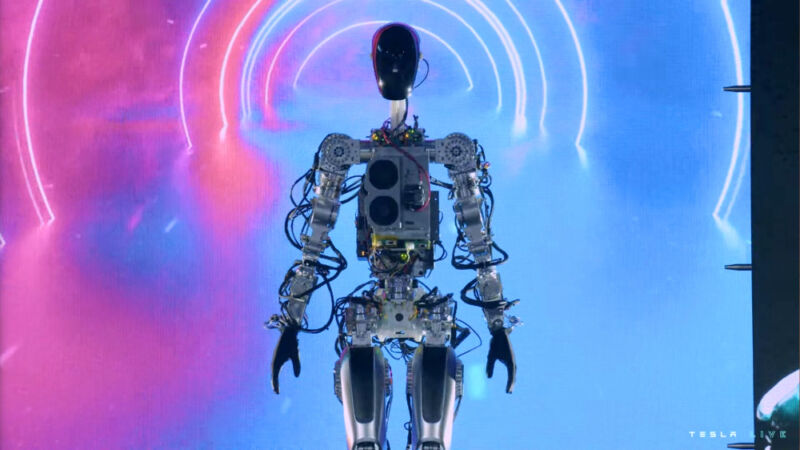 Tesla Reveals Optimus, a Walking Humanoid Robot You Could Buy in 2027 [www.cnet.com]

The Tesla bot can barely stand on it’s own and 3 humans had to roll it out. This looks like a high school science project built in a garage. $TSLA https://t.co/2T4XozXjmL

So the robot dancer last year was there to set the bar as low as possible.

OMG this is just sad, Elon's admitting he has no idea that robot will ever work...if $TSLA were a $25B company doing all these science projects it might be considered interesting yet irresponsible. When a $1T company does it, it's just irrelevant. $TSLA $TSLAQ

critics say robots will steal our jobs, but they couldn’t be more wrong. we’ll actually need three humans to hold up each robot. this is a job creation machine! https://t.co/uqegH4HYJo

Elon is performing a valuable service to society by ostentatiously and persistently reminding us how profoundly full of shit tech CEOs are. https://t.co/y5rVRGf0kD

The transfer of AI knowledge from the vehicle to the robot positions Tesla as the most qualified company to deliver a useful and highly functional humanoid smart robot. pic.twitter.com/mr0G8BlMpK

Tesla has said that full self driving is “coming soon” for at least six years, so don’t hold your breath on this one https://t.co/Z3P2GiXLSN

Last time we saw Optimus, it was little more than a mannequin #TeslaAIDay2 pic.twitter.com/8s8T9e1K4V

Musk presentations are sort of the opposite of Steve Jobs presentations: They’re better and more clarifying with the sound off. https://t.co/kFOXhRxMbS

Honestly why even showcase it. Embarrassing. https://t.co/lmR9RY708M

Musk's language around the Tesla Bot was techno-utopian

“This means a future of abundance. A future where there is no poverty. You can have whatever you want in terms of products and services.”
“It really is a fundamental transformation of civilization"https://t.co/TgXIUOtAiZ

They're parading bot engineers to talk about each hurdle to build the bot. Remind's me AI Day is a recruiting event.

Honestly, Boston Dynamics must be in hysterics right now https://t.co/YmDVT6qAIp

Here it is lifting a piano

I made the mistake of Googling this and Boston Dynamics would have been embarrassed by it in 2009. Does anyone really think Elon freaking Musk can do in like 18 months what the entirety of Boston Dynamics has been doing for over 15 years? https://t.co/4Grb6jmw8C

The only thing missing from the Tesla AI event was actual smoke and mirrors.
They are so far behind on robotic technology if this is a keynote presentation.

Wow so no FSD dojo data center, negative progress on full self driving, autopilot customers dying every month for 28 months in a row, and a completely totally morally bankrupt Elon Musk saying if this doesn’t fit the bill fire me

I can do one better. Jail time.

So far Tesla AI day has taught me that the most busy people at Tesla may be the animators.

It's going to be incumbent on all of us to ensure any of these existing in public end up operating briefly as a boat https://t.co/r2Gu7oKR7A

“It’ll be a fundamental transformation for civilization as we know it,” said Musk.

“No, it won’t” said everyone else.

This also I know: Elon is a charlatan. https://t.co/7DReYvH32j

Tesla is using the same autopilot software for the bot as it uses from the car. Obviously different learnings etc. but a lot of the work on making a car autonomous is being used for the bot to get around. @elonmusk

I would bet Elon $44 billion that this turns out to be bullshit misdirection, but we all know he’d refuse to pay. https://t.co/ss1TqfmKSf

This really is just a design thing (strip away the outside layer of existing machines). The fact that this is reported breathlessly as innovation shows how little many people know about the beats they cover. https://t.co/uShJxE5EcE

It really, REALLY is remarkable how stupid Pony Stark is being with "Optimus". The hypothetical target is industrial use. If you have an industrial workspace that is fully utilized 8-hours a day, you put in a fixed arm or two instead. Replace a man->Pay for it in a year.

when you don’t tell your parents about the science fair until the night before https://t.co/5FJZgI9A5t

The Boston Dynamics people don't need to worry quite yet, Tesla's robot walks like it's shat itself.

I think the focus is manufacturing the cheapest most efficient robot

Tesla talking about reducing the actuator choices globally by optimizing on life and multi use pic.twitter.com/HBCqJss0UK

Tesla making remarkable progress from "weirdo in a suit" to "janky demoware closely attended by three grown men," hard not to conclude that this company is going to dominate robotics https://t.co/FHJlNNifiF

Boston Dynamics took 30 years to get there. Tesla has had 6 months. Boston Dynamics is also costly at $75k for a robot dog, and hasn’t scaled. Cool dancing TikTok’s, though! https://t.co/f32BTEnj74

Elon Musk's entire schtick now is making a demo, smirking about how the companies who have already done a lot of work to get past the demo stage have "hit the wall," and then never even getting far enough to hit the same wall before finding a buzzy new domain to repeat the cycle.

Lol what exactly is meant by “working” here https://t.co/qxY5VOlzow

But it DOES make sense if the goal is to keep the Tesla Grift going. Experts look at this and laugh: the gimp suit last year made more sense.
But Tesla's stock is insanely overvalued, and they are starting to get their ass kicked by everyone else. So Pony Stark needs more hype.

How it started: How it's going: pic.twitter.com/oMDqtkr0f0

You know innovation is dead in Silicon Valley when $TSLA builds a robot that Toyota and Honda already built 17 yrs ago.

congrats to Elon for developing the world’s first robot that looks like it needs to take a big ol’ dump https://t.co/eb1M385Y0l

He envisions a lot of things that don't happen. https://t.co/x7rKHsX6fi

None of the most impressive robots I’ve seen so far have ever been humanoid. There is no need for them to be. But there’s an obsession with creating machines in our own likeness. https://t.co/ABYqu53L1H

Musk has made a number of absurd claims in his career but this one is likely to age the poorest. https://t.co/Pjujn94uBx

Musk on what his robot promises: “A future where there is no poverty. Where people … You can have whatever you want in terms of products and services.”⁰“It really is a fundamental transformation of civilization as we know it,” https://t.co/3Zq0okOHQn

OK, I need an ad agency to come up with a full campign pitch based on the tagline "Will Not Overpower Humans" https://t.co/qgbbIQojlw

Maybe they can add LiDAR to it and train it to drive around your Tesla? https://t.co/Wcm51qFCGZ

Tesla's @ElonMusk unveils @TeslaAIBot, which appears to be the first #AI that runs on #SnakeOil https://t.co/FByIpqxlmC

Of the new Tesla robot, Elon Musk said that a person could “run away from it and most likely overpower it.” "MOST LIKELY"???https://t.co/E3t4f3CNLC

The skeletally clad robot, with visible wiring and hardware, lumbered on stage and waved hellohttps://t.co/TgXIUOtAiZ

Well, at least he always does what he says https://t.co/ilOZXtxQ0g

“The robot would be designed to help with repetitive, menial tasks — and usher in a future where physical work would be a choice.”
What rich people think “a choice” is never fails to amuse me. https://t.co/FpTuQ6nEOU

Musk also emphasized the publicly-owned nature of Tesla several times, mentioning that if the public doesn't like what Tesla is doing they could purchase stock and vote against it. "If I go crazy, you can fire me," he said.

Elon Musk: “and because this robot isn’t classified as a Tesla employee, it can’t squeal to HR when you secretly bang it”

Excellent time to remember that Musk’s special robot is in blackface and designed to perform menial tasks while being “easy to overpower” https://t.co/w4FuECP2Qr
https://t.co/68HGcsTHaA

Elon Musk: “The robot can actually do a lot more than we just showed you. We just didn’t want it to fall on its face.” https://t.co/HrSq9i9kPZ

Elon meets Optimus!https://t.co/sscU40xLFT#Technology is everchanging. This also applies to the #Metaverse -- regarded as one of the biggest milestones in innovation.

Join Galaxy Arena Metaverse and embrace the future of the Digital Era with us.#NFT #Crypto #Elon

“Keep our toy’s name out of your fucking mouth” https://t.co/CFVbVoBRkU pic.twitter.com/xw8tvS5xy9