Apple Announces New MacBook Pro and IT HAS A NOTCH [www.frontpagetech.com] 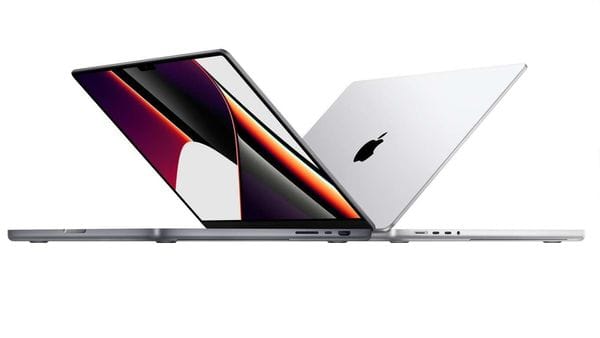 Apple's top-of-the-line MacBook Pro will set you back a ridiculous $6K [knowtechie.com]

A lot of attention will go to the high price point, but the “low end” models will be more powerful, battery efficient, etc. than most every Windows laptop.

Apple got rid of the touch bar! Finally I can buy a new laptop.

i just want a macbook that can handle 126 tabs, three 1K+ row spreadsheets, tweetdeck, photoshop, slack and zoom at once. is that so much to ask?

The new models feature a modernized, streamlined keyboard design that power users will be relieved to learn retains the escape key. However, the vowel keys have been eliminated, but can be accessed through an intuitive pulldown menu option.

It's hard to overstate how concerning this is for the PC industry. There's a big opportunity for Arm + Qualcomm + Nuvia but there's a formidable gap to close #AppleEvent pic.twitter.com/h62q7meiC0

HDMI port is only HDMI 2.0, exactly why I’d much rather have had another T4 port, what a waste. pic.twitter.com/zzUXwfGoO8

2015: We removed your computer's connectivity. Courage!

2020: We completely ruined your computer's main input. Our latest keyboard is better than ever!

2021: We restored your computer's connectivity. That's "what pros need"!

most people won't care about the notch but it is kinda weird that they added a whole notch.....and no Face ID

how many Macs will have the M1 Max

Properly speaking, when one gets used to Dell XPS bezel-less displays anything with a chin, not to mention notch!!!, looks really strange. pic.twitter.com/rXSAzzOaps

These MacBook Pros are going to sell out *fast*. Gave everyone nearly everything they wanted. In some ways by bringing back old favorites. Admit when you’re wrong. And, of course, insane new chips. Well played. #AppleEvent

In Defense of the Touchbar | Opinion

BREAKING: Tim Apple subpoenaed by House Intelligence Committee over previous remarks that claimed “Our customers love the TouchBar” and “Nobody actually misses MagSafe”

I cannot stop looking at it. I’m making it my phone wallpaper. pic.twitter.com/pPDpnaiIyB

Powered by the breakthrough M1 Pro and M1 Max, with the world’s best notebook display, the amazing performance and extraordinary battery life of the new MacBook Pro is going to blow you away! https://t.co/elbrTJty7F

Mac geekery: Apple kills the touch bar, adds back all the ports. But put a notch on the screen. Let the fanboy wars commence.

Battery life numbers for video playback for the 14" and 16" as well as @Apple is finally adding fast charging to the #MacbookPro with 50% charge in 30 minutes. #AppleEvent pic.twitter.com/epv91CPjTs

MacBook Pro 2021: pay no mind to the ridiculous design decisions we've gaslit you with for the last five years, we're giving you what you really need: ports, MagSafe, physical keys. Courage!

The era of laptops is still over for me, not even slightly tempted by MacBook Pros — but boy do I want that M1 Max (or better) in a desktop! As of right now, it’s a toss-up between a future 30” iMac and a Mac Pro as to what machine I eventually upgrade to from this mini

The 14 inch MacBook Pro also lets you spec a 14 and 24 core GPU option, that's interesting nobody called that! pic.twitter.com/nLls9Pgan6

Apple pioneered HiDPI screens with its Macs and is taking Retina resolution up another notch with the new MacBook Pros. 10/ #AppleEvent pic.twitter.com/tUOzW5NGwc

This is not just feeds and speeds. There’s an entirely different and innovative computing architecture across these devices.

Today not everyone needs it, but that’s always been the case when new architectures are introduced.

I mean, this is basically all the charts. NOTICE btw that they left the Intel name off of the previous charts when they first released M1. Now that the major core of the line is switched over, it's in full display. Gloves off. pic.twitter.com/5sJY8Y712N

apple’s spec sheets do not clarify how fast the SD card slot is (SDXC is a capacity spec, not speed)https://t.co/5EYC6Oc8tj pic.twitter.com/ndtpbHWi5i

We're getting dangerously close to Apple launching a MacBook Pro Pro Max, and I'm 100% ready for it

I’m not a big fan of Apple’s naming schemes these days, but M1 Pro and M1 Max feel like they make a lot more marketing sense than ‘M1X’ and ‘M1Z’. Much more appealing

The new MacBook Pro is here
It has a notch
It has MagSafe
It has ports pic.twitter.com/mL5TxEKQt0

Is it a laptop or is it an extraordinary incredibly ground-breaking beast? Who is to say.

dying to know if the SD card slot is UHS-III

For the most part, the MacBook Pro rumors were much more like leaked product plans than the idle speculation of the past. I imagine Tim will send out another memo about this that will then be posted on the Verge 15 minutes later.

This still feels like an entry-level model compared with the 16" MBP or a more fully upgraded 14". That's a steep starting price point.

Plus it looks like the M1 Pro 14" gets 4hrs less battery than the M1 13"? I've been enjoying my "you'll forget you have to plug it in" levels of battery life. pic.twitter.com/bMSM9dvltN

Apple's keyboard team was reassigned to the display, and they're bragging about how much attention to detail went into fucking it up pic.twitter.com/kPWXgq0ZFZ

love the computer hate that notch. can't wait to argue about this forever :/ pic.twitter.com/s4V8XUJgjA

My notch take is basically that if the end result was net negative surface area, I would be offended because no face id etc. But the net is _positive_ screen real estate (.2"x) so it's a bit eye rolling but hard to really care that much about in the end.

Important to note battery life is usually quoted at 200 nits, not the 1000 nits sustained as advertised. Wonder what it is a 1000 nits https://t.co/CjKveOwz4o

“The physical keys replace the TouchBar.”

If Apple is accomplishing this performance and efficiency with the current M1 architecture it is mind-bending to think about what M2 architecture is going to accomplish.

What we have now is GPU-class bandwidth for the integrated graphics as well.

The low power consumption for the new M1 chips are nuts: Up to 21 hours of video playback on the 16inch model — *10* more hours than prior edition.

Looking at the internals of the MBP you can tell that the M1 gave them SO MUCH headroom back. Intel was boning them for years. pic.twitter.com/bwVQkKkhMJ

welcome back, mac! so sorry about the notch...

here's my tweet about apple today: weird to release a processor called M1 Max that goes into Macs, could get confusing, sort of a who's on first scenario, anyway that's my Analysis

Usually, when you make a chip larger and pack more cores, you get performance but greatly sacrifice power efficiency (wattage).

Have to credit Apple's architecture (and designers) with the unprecedented performance and efficiency delivered with these chips.

FaceID is trending… These new laptops have a notch, but there is no FaceID. It’s weird. I have a video in the works for all the good and bad of these new machines ? pic.twitter.com/AGJQeV1LAY

Apple unveils a second chip, the M1 Max, with 32-core GPU and 57 billion transistors. This is the real powerhouse article. #AppleEvent

Apple making its own chips for computers and phones that are way faster and more efficient.

Google making its own chips for smartphones that are way faster and more efficient.

Will Samsung do the same or stick with Qualcomm???

It’s so wild that Apple is going to keep selling the M1 MacBook Pro 13.

The M1 Air is a fantastic entry-level machine. If you feel you need anything more, you should be going to a new MacBook Pro 14. The Pro 13 shouldn’t exist anymore.https://t.co/jShc5TWpI3

So to confirm, the notch has notching to do with FaceID?

Also for the first time, they’re actually showing which PC laptop they’re talking about in these insane graphs pic.twitter.com/g38qbmJngE

Love that half the new MBP features are: we ditched the Touch Bar, we gave you your ports back and we stopped screwing around with unreliable battery life. MagSafe is great, display sounds great, don't love the notch. But price really is for pros only.