Twitter is rolling out Super Follows so you can pay extra for tweets [knowtechie.com] 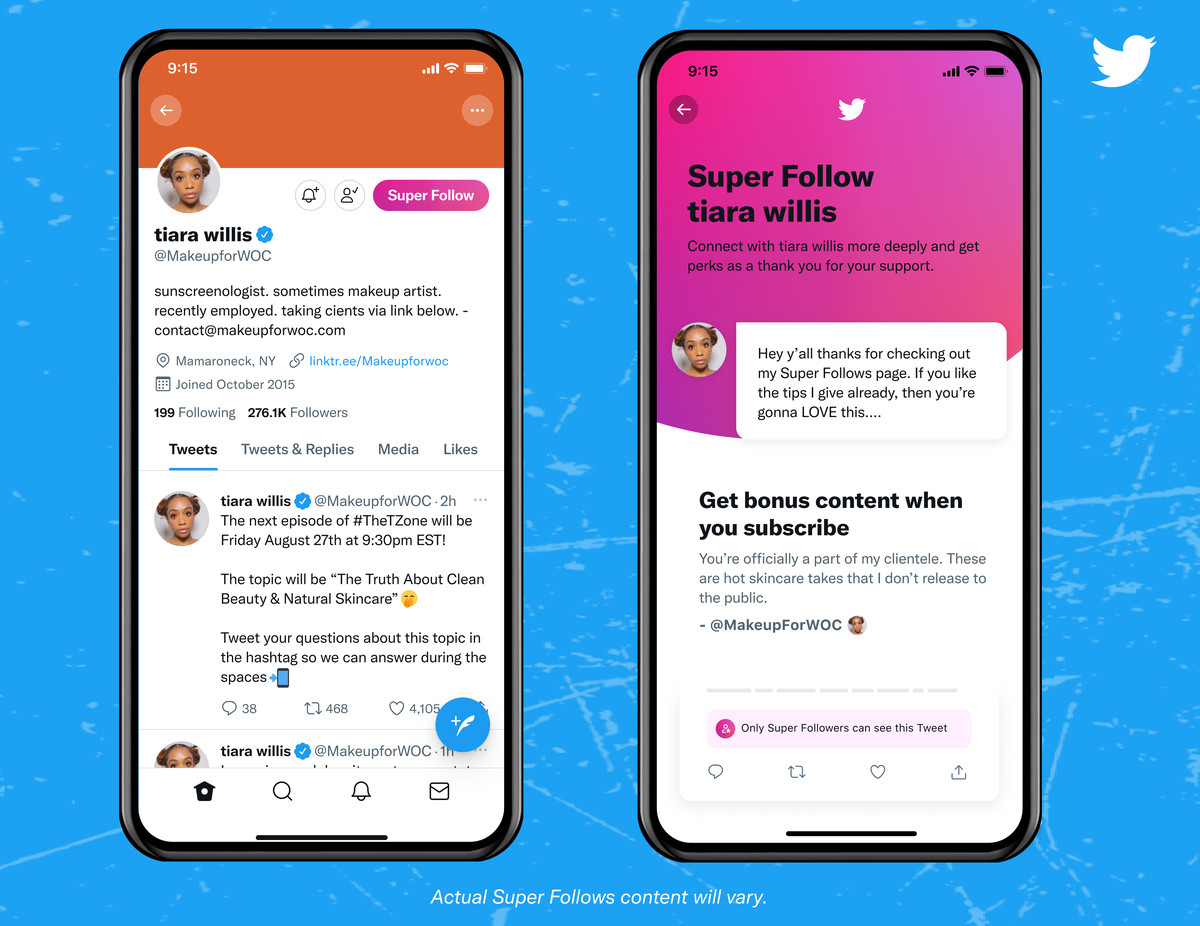 Twitter rolls out paid subscription ‘Super Follows’ to let you cash in on your tweets [techcrunch.com]

introducing Super Follows—a paid monthly subscription that supports your favorite people on Twitter AND gets you access to ::puts sunglasses on:: super Tweets

rolling out in US and Canada on iOS only … ? for now pic.twitter.com/Mb9sgxbw5F

Twitter launches Super Follows on iOS - that means users can charge for subscriber-only content. Creators can set their tweets to go out to Super Followers only, and the tweets will appear in the timelines of just those subscribers. https://t.co/0TXRHkzp0j pic.twitter.com/8RDH3n7I9b

no no no what i need is super tweets without the follow shit, i WANT people to see my hot takes and if they want to argue with me i want them to have to pay to reply to said hot takes https://t.co/UOcdW5dzOG

I don't care who you are, nobody is paying $10/mo to read your tweets https://t.co/JYjPUy30cD

is it ethical for journalists to do Super Follows? ?https://t.co/PIJdAlXVzb

gonna ask people to pay me to not tweet https://t.co/BbK67Ys6j2

It has been truly amazing collaborating with such a thoughtful, smart team, and I want to share some of the learnings that led us to this moment ? https://t.co/T86LyGK6xY

Super Follows are now here and Twitter users on iOS can now paywall their content. This is Twitter’s opportunity to move down funnel and capture some of the market share currently owned by Patreon & OnlyFans.

As for me, you can rest assured that my crap opinions will remain free https://t.co/aUmjBv6qFS

There ain’t a soul on this earth whose tweets I would pay to see. https://t.co/tRFKh6gYUI

it is very funny to me that twitter continues to imply only iOS users deserve money https://t.co/AoPf7YU5Cj

Remember when we announced in June that Super Follows was open for applications?

Today @SuperFollows opens to an initial group of Creators, on iOS in the US and Canada. https://t.co/FR0XklrhMx

Today we’re introducing Super Follows to the world ⭐️ I’m proud to have worked with an awesome team to build a product to help Creators monetize & engage with their most passionate fans. Here’s some insight into this Design & Research-led effort

So it's really only for people like @kanyewest and other celebrities and influencers to share private thoughts, as it limits reach. Why can't Twitter implement blockchain technology and credit us if we view and interact meaningfully? and then allow us to pay to access tweets. https://t.co/DaZ19Gtcwe

Payments innovator @Stripe is teaming up on a new @Twitter feature described today as a "way for people to earn monthly revenue by sharing subscriber-only content with their followers on Twitter." More on that monetization of social media here: https://t.co/W9CPj7s8dU

“income will be subject to the 30% in-app purchase fees collected by Apple or Google. After an account hits the $50,000 earnings mark, Twitter will begin taking a 20% cut.

Twitter launches #SuperFollows for iOS users, allowing a select group of US test users to charge either $2.99, $4.99, or $9.99 per month for their tweets https://t.co/hBKc1Ksk73

I like the idea ….Twitter rolls out paid subscription ‘Super Follows’ to let you cash in on your tweets – TechCrunch https://t.co/p2mHxlWdgn

Twitter rolls out paid subscription ‘Super Follows’ to let you cash in on your tweets https://t.co/AT4z7De9Iv #twitter #socialmedia

If you want that premium Ellie-related content, you're gonna need to start paying up https://t.co/BYYnkRXcG3

Twitter rolls out Super Follows to let you monetize tweets https://t.co/WcbWoFzKQK via @techcrunch First one of us to be approved is buying a beer for the rest of us.