Does Section 230 Provide Platforms Too Much or Too Little Immunity? [techpolicyinstitute.org]

Trump's Silicon Valley Move May Be a Lose-Win Strategy [www.newser.com] 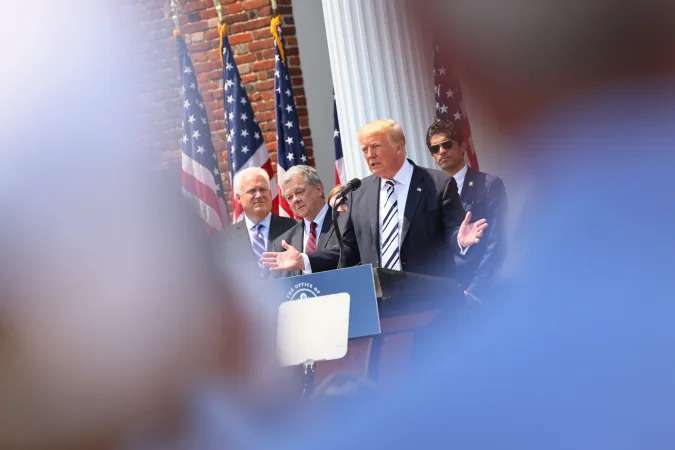 Trump's social media lawsuits, if they're somehow allowed to proceed, could end up forcing him to testify under oath about Jan. 6.

Twitter's TOS (which you agree to when you sign up) literally says "We may suspend or terminate your account or cease providing you with all or part of the Services at any time for any or no reason, including, but not limited to [reasons listed]"https://t.co/WXLjR1rGHm

But here's the hypocrisy: As @ericgoldman points out, the U.S. leader who has exerted the most state pressure on social media platforms' content moderation decisions is... Donald J. Trump. https://t.co/xQkTC3eBKg pic.twitter.com/hNySYWihuf

Trump found not one but 8 lawyers willing to put their names on lawsuits alleging that private companies violated the First Amendment, which applies to government entities. https://t.co/fW0Uytsrmy pic.twitter.com/tNPmLEhgnD

Social media companies need not worry about Donald Trump’s lawsuit. He and his legal team have sued us countless of times — and we are still here making his life miserable.

You're a moron if you think these Republican conspiracy nuts have any thoughtful analysis on the issues with big tech, or any solutions to the real problems surrounding the tech corporations and the power they have pic.twitter.com/EeHUwdCOgE

Trump lawyers know they will never need to produce any discovery because the case will be dismissed before an answer is filed. This lawsuit can only be about distraction and fundraising because it is not about the law.

If I were on the receiving end of this obviously bogus lawsuit, I’d yawn. Then yawn again. https://t.co/fKQVNXUhgm

How you know this is a unserious lawsuit: Trump is already fundraising off of it pic.twitter.com/Njq8VqHAdB

Assuming the lawsuit advances (which is a big if), Trump will have to give sworn testimony about January 6 https://t.co/olegHBbqQN

Trump has the First Amendment argument backwards. Facebook and Twitter themselves have a First Amendment right to decide what speech their platforms amplify — a right that includes excluding speakers who incite violence, as Trump has done.https://t.co/hl9aw1cmPE

And there it is: Trump fundraising appeal off his lawsuit already out pic.twitter.com/4KUaokjezH

Obviously Trump's lawsuit against Facebook and Twitter for censoring his posts is dumb and frivolous, which you can conclude after reading the entire 44-page complaint or just after checking how many of his Very Serious Lawyers use their AOL email accounts https://t.co/bldN6MyIIv pic.twitter.com/XOqsXsa9vx

The First Amendment does *not* apply to non-governmental actors. Full stop. https://t.co/FAmXafuOZZ

That's two guys with "@aol.com" addresses for their professional email, a 13-lawyer firm that does personal injury work and insurance litigation, with lead counsel whose specialty is insurance claims and criminal defense (Matthew Baldwin), and a Greenwich CT firm whose named guys

Three, if it was, DOJ would have to intervene and I’m sure that’s totally what Trump wants.

Four, if Facebook/Twitter were actual state actors, don’t you think the White House Counsel would have told Trump that and advised him how to control them? https://t.co/CaHMln4aT1

This is even more stupid than I expected https://t.co/QNBQHUQ7k0 pic.twitter.com/LKMFEf5sKR

The specific argument in his lawsuit is that Facebook and Google were deputized to censor his speech by the government he himself was then leading. https://t.co/zAdHIKQqMX

Below is an excerpt from Trump's WSJ op-ed, "Why I’m Suing Big Tech."

His core claim -— "Big Tech has been illegally deputized as the censorship arm of the U.S. government" — is being panned by legal experts.

Facebook and Google were just recently *sued* by the US government! pic.twitter.com/3RpBuazOXR

this is trump's lawyer https://t.co/ypXoTlu4rM

Don’t be taken in by the “what if it does” retort.

The “state action” doctrine is about as firmly embedded a principle of constitutional law as there is. To overturn it would have incredibly broad consequences — many of which the current Supreme Court would be loath to embrace.

.@LevinsonJessica: Fmr. President Trump’s main difficulty here is that Facebook, Twitter and Google, while indisputably powerful, are private companies, not part of the govt. When social media companies act, it is a private action, not govt action. https://t.co/CKJYOB3QJf

Trump claims he is filing a "class-action" lawsuit against social media companies for throwing him off their platforms.

What, exactly, is the class?

Presidents who lost re-election and then tried to overthrow American democracy to remain in power?

That is a class of one. pic.twitter.com/i5uxvo2sYp

A good way to tell whether or not you’re being censored is if you get a column in the Wall Street Journal that they then share on the internet https://t.co/5TsnJuWoIs

Those lawsuits should also force him to testify to his partnership with social media company in 2016 - assisting the Russian intelligence services in their attack on American democracy. https://t.co/mj71ARlncM

The responsibility of conservative elites for the authoritarian takeover of American conservatism is very great. Their occasional ineffectual demurrals notwithstanding, @WSJopinion and others have rationalized, enabled, and legitimized Trump and Trumpism.https://t.co/iPWBcbqulu

Former President Donald Trump writes for @WSJopinion: If Facebook, Twitter and YouTube can censor me, "they can do it to you—and believe me, they are." https://t.co/Uo4QSHxpMr

I’m suing Facebook for defamation & misleading or deceptive conduct under ??laws before ?? courts.

Trump is suing under the ??Constitution. https://t.co/ycvo39FxQ4

I, for one, am sure that Trump's frivolous lawsuits are definitely not a textbook case of him trying to distract everybody from something else... like the very non-frivolous lawsuits against his own company. https://t.co/dajivw622N

When paragraph 3 of your lawsuit declares Facebook is the government pic.twitter.com/uvzAJ9BScN

In one of the various Trump books that came out, there was a scene where he realizes that attacks on the media really resonate with the crowds. Wonder if attacks on Big Tech will connect in the same way. https://t.co/1zIa3zYP3M

President Trump is suing Facebook and Twitter! What they did to him and what they have been doing to all of us is flat out unfair! Class Action Lawsuit.
WE DESERVE JUSTICE!

Trump’s lawsuit claiming that Facebook, Twitter, and Google are “censoring” him makes no legal sense—but plenty of political and financial sense. My story this a.m.: https://t.co/xQkTC3wd8Q pic.twitter.com/FjxQxbwG2C

A slight pet peeve here: Liberals saying "lol private companies can't do censorship" may be correct from a legal standpoint. But politically it's a tone-deaf stance. Trump's lawsuit may be dumb but dismissing corporate power over speech is misguided. https://t.co/xQkTC3wd8Q pic.twitter.com/ML41JzxlO5

But here's the hypocrisy: As @ericgoldman points out, the U.S. leader who has exerted the most state pressure on social media platforms' content moderation decisions is... Donald J. Trump. https://t.co/xQkTC3eBKg pic.twitter.com/hNySYWihuf