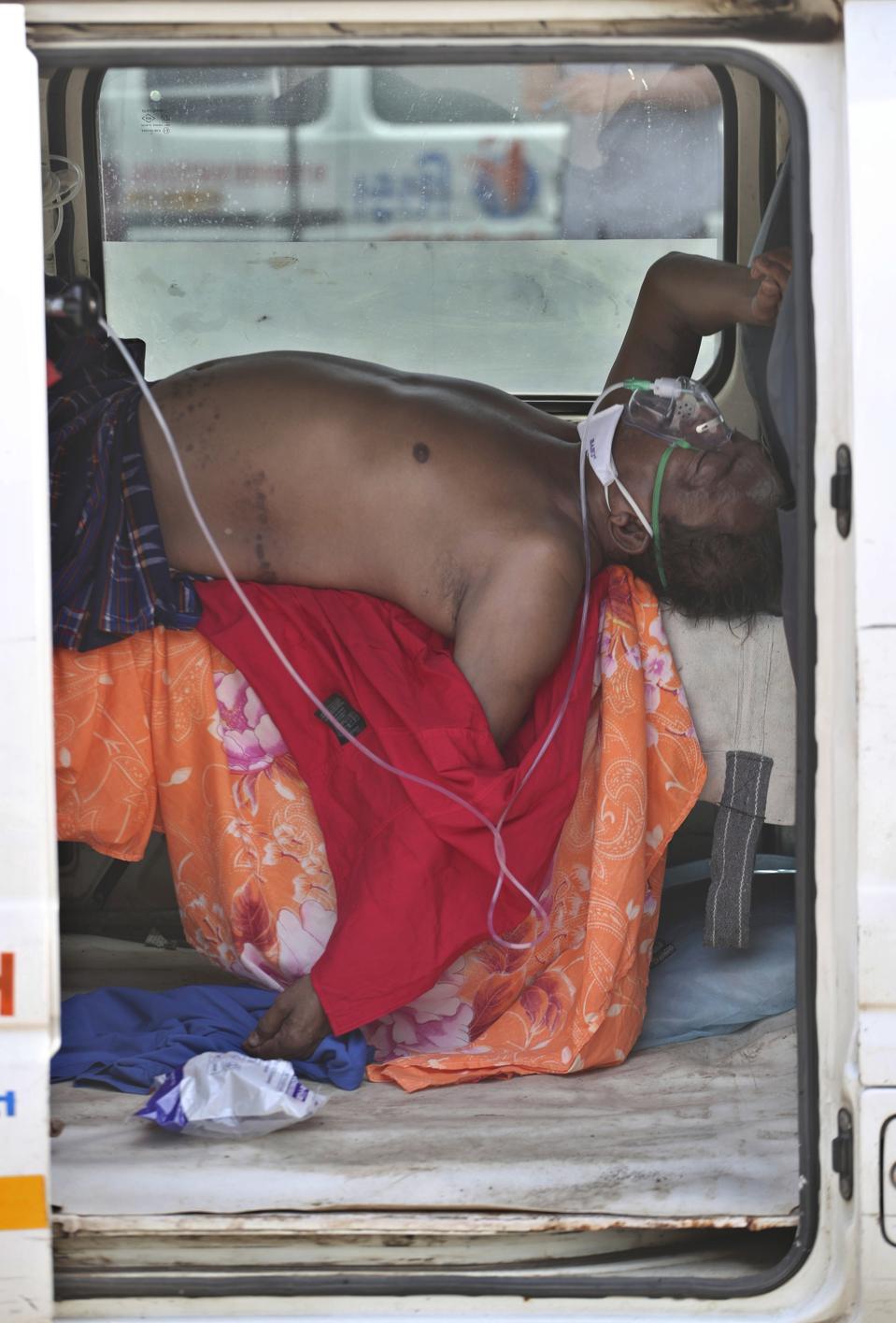 Haunting Images From The Covid-19 Crisis In India [www.forbes.com]

Twitter censored tweets critical of India’s handling of the pandemic at its government’s request [www.theverge.com]

Haunting Images From The Covid-19 Crisis In India [www.forbes.com]

Why India’s worsening Covid crisis is a dire problem for the world [www.theguardian.com]

There are a lot of hard content moderation questions. This is not one.

By allowing an authoritarian government to literally shut down criticism of its handling of a crisis @twitter & ⁦@Facebook⁩ abet the death of democracy.

Put the posts back up. https://t.co/bnuGgnI9fm

India is in the middle of a humanitarian disaster and Twitter preventing that from being shared is a moral failure https://t.co/gpn531ew0I

Chilling: "Twitter has complied with government requests to censor 52 tweets that mostly criticised India’s handling of the second surge of the COVID-19 pandemic. [Tweets] now inaccessible to Indian users" include posts by MP, state minister, morehttps://t.co/0WPD3R4RVy

Hi @jack @vijaya - The Govt of India is having @TwitterIndia remove Tweets critical of it’s absolutely disastrous handling of the Covid crisis. Hope you can hold your ground & restore the content removed/withdrawn. https://t.co/u22f2lWbgj

Hey @jack, we thought you will at least add fact-check labels to call out Govt propaganda on the covid crisis in India, as you did against Trump. Instead, @TwitterIndia seems to have officially joined Godi Media by blatantly suppressing criticism of the Supreme Leader. https://t.co/W5G8snGBRT

“Finally, #Facebook’s human rights commitments will be tested most not in the US or Europe but in significant markets like #India and the Philippines with authoritarian leaders.” | It’s not just #Twitter that will have to face up to Modi’s Govt. https://t.co/6DYZlp9Bkb https://t.co/ledA0EGMfp

As India’s coronavirus pandemic burns out of control, the country’s government is cracking down — on social media. https://t.co/seFR8q6G2Z

This.
Is contemporary India for you, its governance and its government:
Shoot the messengers, cover-up the real issues

Wow @Twitter this is why I left Facebook. When you become the propaganda department, you’re no longer something I want to support. @jack, this is unacceptable if true. https://t.co/x1UwpCsOa4

As a shattering outbreak of Covid ravages India's teetering health care system, its government ordered the takedown of dozens of posts critical of its handling of the pandemic. Twitter and Facebook complied. A struggle over who can say what online looms. https://t.co/K9InoOvHeq

While citizens are sharing resources and raise funds for those affected by Covid, the govt is busy asking Twitter to remove tweets critical about how they’ve handled Covid. https://t.co/t3JPE7Yrx7

You can criticize the Indian government for its Covid management, but no slacking at all when it comes to image management.https://t.co/iQDUUKmWwy pic.twitter.com/FZsRZ8DEck

And credit to @medianama for being the first to notice these censorship request posted on @lumendatabase https://t.co/gMZn0NFCPW

This is what the government of the day has prioritised. Not smooth Oxygen supply, not medications! https://t.co/THkXq6mdon

Twitter has removed or restricted access to more than 50 posts in the past one month at the behest of the Indian government, inc tweets that criticized its handling of the coronavirus pandemic - after previously blocking accounts over farmers’ protests https://t.co/X4kdfsJ1to

BREAKING: As the second wave raged, the government ordered Twitter to take down tweets criticising its handling of the pandemic. Twitter took down tweets by a sitting MP, MLA, an actor, and two filmmakers, among many others:https://t.co/fKkqmiLA1w

the COVID situation in India is heartbreaking to see from across the world. People are dying because of a shortage of oxygen, but the government is busy forcing Twitter to remove critical tweets ?‍♂️ https://t.co/HR6M2KpJM6

Really seems like these platforms aren’t as into free speech as they say they are. https://t.co/0MJsPE19ij

IMPORTANT!
Twitter complied with Indian govt's demand to censor 52 tweets (by an actor, sitting MP, state minister and 2 film makers) that mostly criticised its handling of the 2nd surge of the COVID-19 pandemic.@medianama explains what was removed.https://t.co/cDjRmoKGFK pic.twitter.com/TPX3BfDrw9

Twitter Is Blocking Tweets That Criticize How The Indian Government Has Handled The Pandemic!

The coordination between @Twitter and the fascist Indian government is unbelievable!https://t.co/jAfNiHQZYp

The heart of the argument that platforms have their own free speech rights to moderate as they want is right here: a government telling Twitter what to do, and Twitter being made to comply even though it is obviously the wrong thing to do

the government of India has the time and capacity identify tweets to be censored. no big deal about all the tweets begging for oxygen, ventilators, hospital beds, medicines. https://t.co/UEhFYVRi7k

Every time Twitter, Facebook, or YouTube has a minor spat with Roskomnadzor about Navalny videos or whatever it is non-stop news, but they've out there censoring whatever Modi requests for a while now https://t.co/FNEZ632G1L

The order was aimed at roughly 100 posts that included critiques from opposition politicians and calls for Narendra Modi, India’s prime minister, to resign.https://t.co/Hi4hwBA4ZF

A state minister accuses Prime Minister Modi of downplaying the seriousness of the pandemic. The gvt orders Twitter to take it down. It's hard to imagine more core political speech at a more serious time.

More regulation of the Internet is necessary, but any capabilities established will set global precedent, persist beyond current decision makers, and shift responsibility for tradeoffs from industry to policymakers. There is absolutely room to make things worse, not better. https://t.co/s0LKPzj1s6

Grotesque actions here on the part of the Indian government.https://t.co/AwrInQHMNq

Of course they did. Twitter is also censoring tweets about India’s farmer protests, the largest ongoing protests in the world right now. The farmers are protesting law changes they feel benefit large corporations over small family farmers. Rightfully so! https://t.co/5vaxZY9KIg

Last week, howard Dean told me that Modhi was “trump with brains.” https://t.co/LnTSmdnu08

"India’s government on Sunday said it ordered Facebook, Instagram and Twitter to take down dozens of social media posts critical of its handling of the pandemic." https://t.co/E6c49VykXF

Will link to this article in response to “But social media operates in countries that don’t have an equivalent of the First Amendment and Section 230.” https://t.co/qYQm1krH1Q

Since I wouldn’t want to get on the wrong side of Twitter, can I just say that the Hindu nationalist BJP government has done everything in their power to fight Covid. They’ve been absolutely bloody marvellous, so they have.https://t.co/YcckCMG020

You’ll be *shocked* to see that many of the people outraged about this are the very ones calling for MORE Twitter censorship in America https://t.co/44KmQsiQOw

This goes beyond 50 tweets and Twitter.
- Unsurprisingly, reports are now suggesting that others got orders to block/withhold content too.
-[@medianama] found out because one of the companies disclosed its actions through a "voluntary" mechanism. (1/8)

Oxygen supplies can wait. The government is busy right now sticking its grubby fingers in the social media dyke to keep bad news from trickling out. https://t.co/5FIxRpZ1jv

India’s government ordered Facebook, Instagram, and Twitter to take down dozens of social media posts critical of its handling of the pandemic, includng critiques from opposition politicians and calls for Modi to resign as India’s prime ministerhttps://t.co/R2yEkVUP0T

"India’s government ordered Twitter to block more than 50 tweets that criticized how it has handled the pandemic. Twitter complied, preventing people in the country from viewing the posts."https://t.co/6jdfH6q228

Complete moral failure and misguided priorities of the Indian government

This is a shame https://t.co/R7WOd9GfDg

shocking Covid crisis in India right now, and this is what the government is fiddling with… https://t.co/eWOynpvrEb

Indian government blocking account who criticized them or giving information what's going right now in India to #world about this #PANDAMIC #lockdown2021,

No freedom of expression is allowed.https://t.co/1Dsuyvvyee

@Twitter your approach is biased & a violation of rights to freedom of speech. By taking down 52 tweets on BJP’s request you are supporting their failures and inefficiencies in dealing with the worst pandemics of the era. Pleas reinstate those tweets. https://t.co/WnPCTIPTbi

Looks like the Govt toolkit on blocking critics has been activated.

It's Monday in India ⏰

India ordered 100 companies posts on FB, Gram & Twitter to be take down before it cause panic.

Grotesque actions here on the part of the Indian government.https://t.co/AwrInQHMNq

The world must act: India's Covid crisis is a dire problem for us all | India - The Guardian https://t.co/2nIYSE3SBZ

Why India’s??worsening #Covid19 crisis is a dire problem for the world. Urgent supplies are needed to stem the rampant spread of infections in country of 1.4 billion https://t.co/un0F1mTpQh via @guardian #GlobalHealth

I'm not seeing much alarm on my timeline about what's happening in India. Yes, I know American progressives are better at cosplaying attacks on US imperialism than effecting true global cooperation. But this looks like a potentially major catastrophe. https://t.co/qzYqtvxLhF

Why India’s worsening Covid crisis is a dire problem for the world https://t.co/09Y65dfsOQ

A human and largely preventable tragedy unfolding before our eyes and we STILL are not prepared.

Why India’s worsening Covid crisis is a dire problem for the world https://t.co/zGXMYSIgnh

”Experts have repeatedly warned that allowing the virus to circulate unchecked increases the risk that dangerous new strains will emerge and prolong the pandemic.”

Why India’s worsening Covid crisis is a dire problem for the world https://t.co/0ba3ieW1UL

Exactly how long are we planning to hide the administration’s incompetency in dealing with the pandemic?#WhereAreOurVaccines #Twitter #CovidIndia #COVID19 https://t.co/107QuvOL0G

This is ridiculous: India's government should be held accountable for the disastrous situationhttps://t.co/jymyzaDxg7

Amid the worsening #COVID19 outbreak in India, the Indian government reportedly ordered social media platforms to take down dozens of social media posts critical of its handling of the pandemic. By @paulmozur and @Karan_Singhs: https://t.co/VyhUMeq9gK

The virus is changing in ways that make it worse, not better. Why India’s worsening Covid crisis is a dire problem for the world https://t.co/opPYrqDURb

Why India’s worsening Covid crisis is a dire problem for the world- highlighting the lead for a concerted global approach to use resources & against vaccine hoarding by some countries https://t.co/sin1rwkBq8

Why India’s worsening Covid crisis is a dire problem for the world https://t.co/QTrkjY61xU

“The catastrophe unfolding in India appears to be the worst-case scenario that many feared from the Covid-19 pandemic...” This so didn’t have to happen. https://t.co/V0G6ZuyFBF

Why India’s worsening Covid crisis is a dire problem for the world https://t.co/rSYMjsTbnK

The dramatic covid situation in India could put the global approach to fight the corona pandemic at risk. https://t.co/LEm9W0xyTc