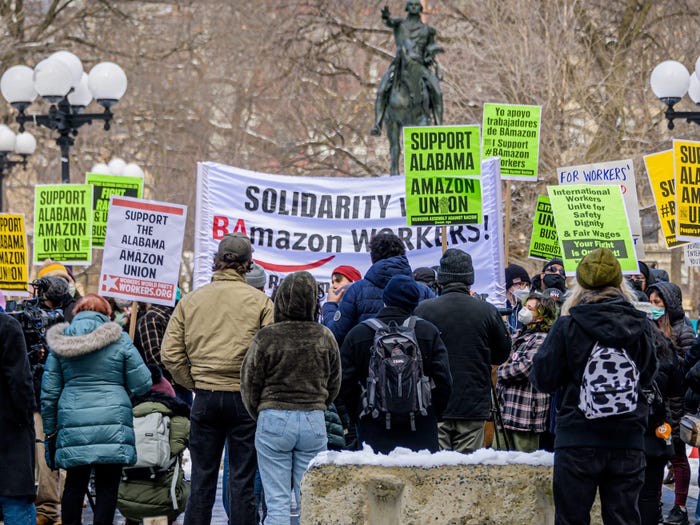 Amazon Faces What Could Be the 'Most Important Union Vote in Decades' [www.businessinsider.com]

Can you imagine Apple execs tweeting like this? [www.ped30.com]

Amazon Sued Over Lack of Meal and Rest Breaks for Workers [gizmodo.com]

Amazon Argues With US Senators Elizabeth Warren and Bernie Sanders on Twitter [politics.slashdot.org]

Brands like Google, Disney, and Coke have brilliant people working for them in coms/social...and a lot of those brilliant folks are really snarky.

Want to know why Disney isn’t snarky? It’s not the brand. Why isn’t Coke? It’s not good for the brand.

Jeff Bezos, worth $180 billion, is getting nervous. He's afraid that if Amazon workers in Alabama vote to unionize, it'll give workers all over America the courage to take on his greed & win economic justice. He's spending millions against this union to keep billions for himself. https://t.co/Px1zAtk87z

Jeff Bezos is pissed? Well, we’re pissed. And everyone can tell his PR campaign means nothing other than the fact that he’s getting nervous. Game on, babe. https://t.co/qbNmPPWpst

The tweets were so surprising to many Amazon employees that a security engineer at the company filed a trouble ticket over concerns that the tweets "may be a result of unauthorized access.” https://t.co/AvVfLUgeHj

It’s really inspiring to know that no matter how wealthy you may become, you can still be egregiously stupid. https://t.co/zJSToHYgLa

We’d do well to distinguish between those responses and not just tribe up against any angry rich guys. https://t.co/bNCXsP3GaC

Really good reporting by @DelRey here. Disappointing to see Amazon engage in such childish attacks on Members of Congress. They should be more concerned with following the law. https://t.co/pI7rHMJjT8

And @DelRey gets the goods on who the mad tweeter of Amazon is. The obvious suspect, natch! https://t.co/6mZP9nCmUV pic.twitter.com/bdGDFVq4UL

Of course. Those tweets weren’t some rando going rogue. They were and are policy set from the top on down. https://t.co/zZQpflOKGF

The fact that Amazon workers in Bessemer, Alabama have the guts to take on the unquenchable greed of Jeff Bezos, the richest man alive worth $180 billion, is really getting under his skin. And you absolutely love to see it. https://t.co/bzCPHVwC9u

Even an internal Amazon support ticket was like wtf is up with those tweets, reports @DelRey https://t.co/lDgj0DvoAD pic.twitter.com/gVEM7ImFGq

Not sure why Amazon execs think this approach will do anything except stir up the left even more.

It’s a ton of “earned” media for Sanders, Warren, Pocan, and their people know it. https://t.co/ygFMNd6o0x

An Amazon employee filed a support ticket when they saw what @amazonnews was tweeting last week. "Suspicious activity." They were in disbelief. https://t.co/N2I8j2pE5N

New: Amazon's Twitter war with @berniesanders & @SenWarren came after Jeff Bezos expressed dissatisfaction with the company not pushing back aggressively on criticism execs feel is inaccurate or misleading, Recode has learnedhttps://t.co/bxapcGeeck

Tl;dr: Amazon started a pissing contest over employees pissing in bottles because Bezos was pissed about being crapped on. https://t.co/LTNUDnNnmL

Bezos and Bernie are both d bags but at least Bezos made his money selling products as opposed to Bernie becoming a millionaire off of empty promises and tax dollars https://t.co/OhzN1sxzLw

“Amazon leaders were following a broad mandate from the very top of the company: Fight back.” https://t.co/8lK76m5QLT

It showed that it was a PR tactic aimed at the boss rather than the public, not least because it was monumentally terrible PR. https://t.co/XhOgdXy8Tg

Speaking from personal experience but nothing makes some executives behave more erratically than a serious union drive. They start losing control of the narrative inside their own companies. https://t.co/CvwBqPi3je

An Amazon employee filed a support ticket when they saw what @amazonnews was tweeting last week. "Suspicious activity." They were in disbelief. https://t.co/N2I8j2pE5N

Can you imagine Apple execs tweeting like this? https://t.co/vyEJuRGy36