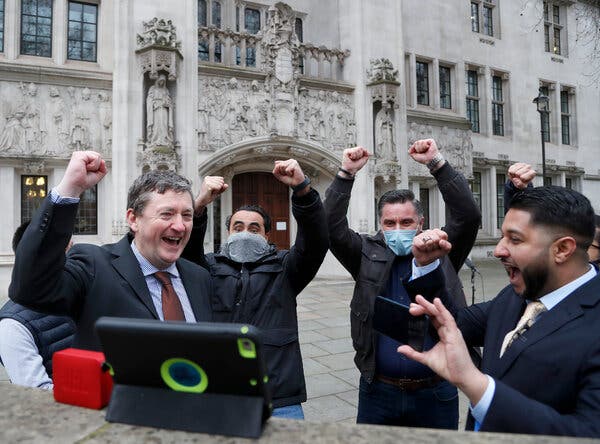 The Guardian view on the Uber drivers ruling: a challenge to government [www.theguardian.com]

It's very disturbing that more U.S. judges haven't reached the same, obvious conclusion that the U.K.'s Supreme Court unanimously reached today about Uber drivers -- that they're employees & not independent contractors in business for themselves. https://t.co/EvaWShkExI

We need the same in the US.#WeCanDoBetterThanCapitalismhttps://t.co/2nuWJndO8k

A fantastic, historic judgement that will positively impact the lives of millions of workers.

The only sadness is that it took the courts to settle this rather than parliament. https://t.co/xpVJ3jXzTu

A huge victory for gig economy workers and trade unions everywhere! And a small step to ending precarious and insecure work. https://t.co/8y4fYyqSYE

Tens of thousands of Uber drivers can now claim the right to be classified as workers, said Nigel Mackay, a lawyer representing the drivers. The firm will now seek compensation for thousands of drivers who he says are entitled to an average of 12,000 pounds ($16,700) each. https://t.co/g4SqxqqklY

In a big victory for gig workers, the U.K.'s Supreme Court unanimously rules that Uber drivers are not independent contractors and must be classified as workers. The court says the drivers are thus covered by laws guaranteeing minimum wage & paid vacationshttps://t.co/SU7ZSISWib

UK: The judges said that Uber drivers are “workers” entitled to rights like minimum wage, holiday pay and rest breaks. The court said the contact terms were set by Uber and working conditions were controlled by the company.https://t.co/I521CtPum2

Millions of hard working people just like him have fought so long just to have basic rights owed to them as workers. This is huge win against the gig economy! https://t.co/YkTnWv7opM pic.twitter.com/paj5KAgoGe

“Uber Technologies Inc. lost a U.K. Supreme Court ruling over the rights of its drivers, in a landmark decision... The judges unanimously ruled that Uber drivers are ‘workers’ entitled to rights like minimum wage, holiday pay and rest breaks.” https://t.co/SNbNGlkJHF https://t.co/Vm2JTpUr9q

The UK going in a different direction to California on this is a good thing . A big loss for Uber here. When the 'gig economy' becomes exploitation, a line is crossed. https://t.co/zU4sCY5Brq

This is huge - with potentially massive ramifications across the whole gig economy and for employment rights in the UK. Uber could face an enormous compensation bill here. #ESGhttps://t.co/BOksfqwYCt

Uber very keen to point out that today's ruling only applies to the group of drivers (25) who brought the case. So we're not *immediately* looking at a huge increase in payments/costs here.

Uber have now LOST their appeal on the ruling that they employ workers, not contractors.

I said back in 2019 that refusing basic benefits was silicon valley bro culture at it's worst and a massive own goal.

Great victory for @uber drivers in the UK including minimum wage, holiday pay and protection from discrimination https://t.co/q4Ve4dCI0m @ADCUnion @ITFglobalunion

This is absolutely brilliant news and all credit to the unions and workers who fought for SIX YEARS to make this happen: https://t.co/PYIZxG8JAw

Uber drivers are, in fact, employees, at least in the UK https://t.co/CjJhdfcUy5

Uber Drivers Are Entitled to Worker Benefits, a British Court Rules. The decision was an important victory for labor activists in the U.S. and Europe who are pushing for better wages and stronger protections for gig economy workers. https://t.co/u4YiiGM5gu

Sound familiar, musicians? (We are the original gig workers, after all) https://t.co/0MOvAKweXi pic.twitter.com/qmP9e1AMCd

Britain’s Supreme Court ruled that Uber drivers must be classified as workers entitled to a minimum wage and vacation time.

The case had been closely watched because of its ramifications for the gig economy, reports @satariano.https://t.co/Q0QcEoR9NL @nytimesbusiness

"Drivers are in a position of subordination & dependency in relation to Uber such that they have little or no ability to improve their economic position through professional... skill." https://t.co/lLwa8boGHq

? NEW: Uber just lost a huge UK legal battle over drivers' rights.@Yaseenaslam381, one of the ex-Uber drivers who kicked off the case in 2016, told @BusinessInsider "Companies like Uber rely on vulnerable people who don't understand the law."https://t.co/DDzXTQxVr0

さあ大変だ→ Uber drivers are entitled to a minimum wage and other benefits, a top U.K. court has ruled, dealing a major a setback to the company’s business model https://t.co/HcEBdZcpn5

End of the road for Uber. Aslam wins! Plus really nice judgment from George Legatt to get his UK Supreme Court appointment off to a flying start. #ubervaslam https://t.co/IOUlpurmMn

Gotta love American Exceptionalism... we just accept that companies cannot exist if they pay their workers a living wage. I'm sorry but if your business model is predicated on exploiting people you should not be in business and good riddance!!! https://t.co/hvBaSeGQwl

Boom: “Uber drivers must be treated as workers rather than self-employed, the UK's Supreme Court has ruled.

The decision could mean thousands of Uber drivers are set to be entitled to minimum wage and holiday pay.” https://t.co/CgR6CIgrKb

Uber defeated in the U.K.

“Uber drivers must be treated as workers rather than self-employed, the UK's Supreme Court has ruled.

The decision could mean thousands of Uber drivers are set to be entitled to minimum wage and holiday pay.”

The right decision. About time this matter was settled. https://t.co/hTs1Ta8ibN

On the heels of this historic victory: @IWGBunion & @UPHD_IWGB and @jamie_woodcock need to drop their cruel and unnecessary lawsuit against the people who won this victory for Uber drivers. Stop harassing @ADCUnion @Yaseenaslam381 & @jamesfarrar https://t.co/5yAMN1OIZv

The markets rationalists will tell you Australia has to get with the times when it comes to Uberisation, the truth is Australia is behind the rest of the developed world on gig economy workers https://t.co/zeZv7CbPq2

The UK's Supreme Court has ruled that the app firm Uber must classify its drivers as workers rather than self-employed.

This ruling has enormous implications for all the workers using apps and involved in #gigwork:https://t.co/pUFbDZlXEU

Great news. But how absolutely depressing is it that we have to celebrate a ruling that sounds like it’s from the industrial revolution https://t.co/2OjQSKGDfv

"#Uber lost a crucial legal fight in the U.K. on Friday as the country’s Supreme Court upheld a ruling that its drivers are workers, not independent contractors. Judges voted unanimously to dismiss Uber’s appeal against the ruling." https://t.co/Qd7ubzwoW9

“The U.K. court also said that the group of Uber drivers weren’t independent contractors because Uber ... imposed contractual terms upon them.”

How can any IC do any kind of business without a contract? https://t.co/TKXujEqWeM

Huge congratulations to @Yaseenaslam381 and @jamesfarrar who took on Uber and won. ??

Their persistence over six years has established that Uber drivers do have workers’ rights.

This is massive for all gig economy workers. https://t.co/XONqJ4cic4

But what about the Uber and App-workers? Loss power fewer rights
https://t.co/qFN41muXXR

The Supreme Court victory for Uber drivers is the right decision. Gig economy workers deserve the same workers rights for which we’ve fought for hundreds of years: holidays, fair pay, and sick leave. A good day for working people!https://t.co/6BKGsC0TAf

The UK Supreme Court unanimously denied Uber's appeal, finding that Uber is not an intermediary and that drivers are in fact workers under UK law. Good to see some courts can still apply the law to the facts. https://t.co/h5clNfxBWV