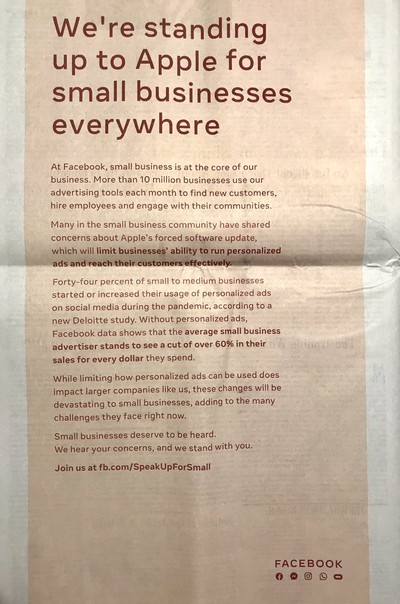 The Best New Features and Fixes of iOS 14.3 [lifehacker.com]

Facebook stands up for 'small businesses' with full-page ad against Apple [www.cultofmac.com]

Apple now shows you all the ways iOS apps track you [www.zdnet.com]

This is the biggest load of horseshit

If FB is crying about this, then Apple's making the right move.

Seems like @Facebook is bitter that Apple is limiting the harmful tracking practices of FB's advertising model https://t.co/nJymiqy37S

Lord knows I have my problems with Apple, but Facebook – of all fucking companies – taking a "why won't you think of the small business" line to defend its privacy plundering ways is nauseating ? https://t.co/yDZHL2886V

FB insists that its anger with Apple's new data policies are about its deep and longstanding concern for protecting small businesses, and not about the fact that its own data surveillance could be curtailed. https://t.co/VqT43VT4Hb

Funny that Facebook runs one of the most effective advertising systems in the world but went to print for impact and attention https://t.co/pf0T7GVxQL

Apple is making a huge change to settings on iPhones in the name of privacy. Here's what it means for the mobile ad industry: https://t.co/M25icFPp5O

“...We hope the DMA will also set boundaries for Apple"

“...Apple controls an entire ecosystem from device to app store and apps, and uses this power to harm developers and consumers, as well as large platforms like Facebook”

Facebook is beyond shameless. How can anyone work for a company attacking Apple for protecting user privacy? https://t.co/y6ziybAPnU pic.twitter.com/HqSArMwNBJ

Apple “dumped 10,000 puzzle pieces on the floor and walked away” says one industry participant on Apple's upcoming change to how it displays privacy warnings in apps: https://t.co/8qcq2pcRLH

Facebook’s claim is that Apple giving users the ability to opt out of being tracked across mobile apps and websites will “devastate” small businesses. ? https://t.co/idTmVVvt9m

"We're standing up to Apple for small businesses everywhere."

Thanks for this ad, Facebook. We can all use a good laugh right now. https://t.co/I3ORckkMeJ

Apple’s seismic change to the mobile ad industry draws near

Apple is making a huge change to settings on users' iPhones in the name of privacy, and it will fundamentally change mobile advertising on those devices.

The last time a company went all-in-ads against Apple this ended in them being removed from the App Store.

This is excellent news.

There’s a simple way for #adtech spam companies to get people to opt-in to privacy sucking cookies: pay them.

Want to follow me around the Internet? Better be offering $$$$.

Please let us steal your data or else... https://t.co/fRhW0gNppx

Irony how Facebook hurts over this law than they seem to be accusing Apple of. Just a pepper body stuff as usual from Zuckerberg. https://t.co/MjkuBQXwaM pic.twitter.com/dI7pYsLSrU

Apple's change will essentially take a privacy option that was previously buried deep in users' phones and put it front and center when they open an app.

It's expected to drastically impact the ability of advertisers to target ads the way they have been.https://t.co/wEnKXgvixN

Good read about the tsunami that's about to hit the mobile app ecosystem, which has been largely reliant on ad revenue: "would [consumers] be willing to shell out money to use every app they use? And if not, will those apps survive?" https://t.co/KuuV2SEFTM

“Fighting for businesses” is an interesting way of saying “we don’t want to ask for permission to track location and data” https://t.co/183XpQty3W

Stop using "small businesses" to push what is clearly your own issue https://t.co/jWlwDqOBaP

"We’re standing up to Apple for small businesses everywhere"

FB is running full-page newspaper ads in the NYT/WSJ/Post that attack Apple's upcoming restrictions on third-party tracking in iOS apps.

I still don't really get why is this so important to FB? https://t.co/87AkW8tpYT

Facebook took out ads in the NYT, WSJ and WaPo today attacking Apple’s expected iOS 14 changes that will make it harder to collect data for targeted advertising https://t.co/vvNkU5jjZ2 pic.twitter.com/SxTdrCJVMb

Taking out full page newspaper ads to decry another company’s respect for user privacy is some next level disconnect. https://t.co/wXin7Gz1f8

You know you're doing something right when Facebook is complaining.https://t.co/GrnX7uBKNo

Apple’s new identifier tag which lets companies track the effectiveness of ads without gaining a user's personal data or pinning a purchase to an identifiable user for mass-collection.
https://t.co/LDHV4JyQr5

Apple now shows you all the ways iOS apps track you https://t.co/Z2fpiB6Mft by @the_pc_doc

The next phase of battle between Apple & Facebook.
Apple now discloses all the ways Facebook app tracks you & asks for opt-in consent.
This disrupts FB's surveillance capitalism model, which they say will kill small businesses in #SpeakUpForSmall campaign:https://t.co/RlUuY85ZAW https://t.co/eTjeX0m5mB

Very few things bring me as much joy as watching Facebook complain about another company's privacy standards. Where's the #kneeslapping emoji when you need it. https://t.co/m4yAKIrJaH

I wish someone can find the money to issue full page ads of how facebook is spreading hate across the world. https://t.co/byf8JCKlXL

I marvel at the clumsiness of FB’s PR. By running full page ads that are transparently disingenuous will call attention to a change that Apple itself has barely mentioned. https://t.co/yACRhSJVhY

Cry me a river.

Apple to prevent Facebook and others from collecting your personal data without your permission. Facebook objects! Shocking.

Gotta love this Facebook vs. Apple fight. They’re telling us it’s about privacy and small business. That’s bullshit. The two are locked in a war between messaging apps and are trying to kneecap the other side. https://t.co/RJIbldQTfl pic.twitter.com/irXAZ2gfBu

Its pretty clear who Facebook is standing up for once you see its new privacy profile in the App Store: pic.twitter.com/VMbBhoBSB4

Getting Facebook to write full page articles against you can only prove you’re doing something right. https://t.co/3Y1E4zdSlO

Facebook blasts Apple over a privacy change that it claims “threatens the personalized ads that millions of small businesses rely on to find and reach customers.” https://t.co/bYiQ4Mhj8d

Apple finally responds to Facebook: "We believe that this is a simple matter of standing up for our users. Users should know when their data is being collected & shared across other apps and websites— & they should have the choice to allow that or not..." https://t.co/fYW57NxuJM

'Apple will take a privacy option that was previously buried deep in users’ phones and put it front and center, which is expected to dramatically impact the ability of advertisers to target ads the way they have been since people likely won’t opt in.' https://t.co/bIdZFYbxhP