Facebook is facing another antitrust probe, this one over Oculus [www.inputmag.com]

With five tech firms leading the industry, antitrust suits will be harder to make stick [www.axios.com]

We can have democracy or we can have Facebook, but we can't have both [the.ink] 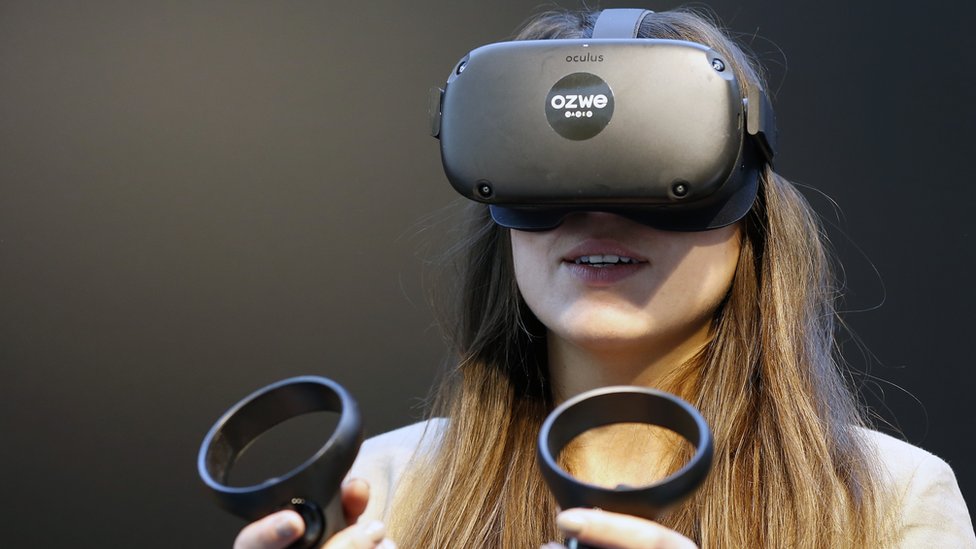 'The Wrath Of Mark': 4 Takeaways From The Government's Case Against Facebook [www.npr.org]

I’m imagining someone at the FTC has to set up an oculus for their kid and they snapped. https://t.co/zJQjvBowGR

Facebook's been hit with another antitrust complaint. This time it's for tying Oculus use to Facebook accounts. https://t.co/kqHcapn1iy

Today, the Bundeskartellamt has initiated abuse proceedings against Facebook to examine the linkage between Oculus virtual reality products and the social network and Facebook platform.

? ?? Federal @Kartellamt has just open abuse proceedings against Facebook over the link between Oculus virtual reality products and the social networkhttps://t.co/qhIdT2TVSA

????Mark Zuckerberg's letter to employees: "Today's news is one step in a process which could take years to play out in its entirety. In the meantime, you shouldn't be communicating about these cases or related issues except with our legal team."

IMO way to stop this level of predatory behavior is to charge management & have them face 10 years in prison. Do that to @Zuck et al and everyone will get in line. @Facebook @FBIWFO

What odd framing "lawmakers & consumer advocates did not address a hard-to-deny factor: The cases against Facebook are far from a slam dunk". So don't bother with hard cases? Good analysis otherwise. Suit could also ⬆️ transparency @MikeIsaac @ceciliakang https://t.co/sfj7lyx14b

After a decade of moving fast and breaking rules, Facebook must face consequences. The company’s abusive practices harm competitors and consumers, trampling on privacy protections for far too long.https://t.co/rDn8qvJWHz

This week keeps getting better! Alright FTC, do Oculus next. https://t.co/Moj7TkDy9j

I’m curious to see if this probe (in Germany) will have any impact on the US antitrust suit filed yesterday regarding WhatsApp and Instagram. https://t.co/ndW90zDy3m

At the time of the acquisition Oculus offered distressed users an assurance that “[y]ou will not need a Facebook account to use or develop for the Rift [headset].” https://t.co/1zxxkUXn1m https://t.co/hAb0QM8VKQ

i make the case for instagram to be set free. let it loose from the branding nightmare that is facebook. zuck must def knows insta would thrive on its own and fb would wither without it, which i agree!https://t.co/cihAHgR3Kh

Key analysis of the lawsuit to breakup Facebook. The filers did their homework, prepared a strong case, and with all the political winds in their sails, might very well prevail. Truly an exciting time for countering Big Tech monopolies. Cheers to the decade of reckoning! ? https://t.co/0q6fSaER38

If you are the Facebook software engineer who sent this internal email in 2013, I like your style and would love to Zoom with you pic.twitter.com/d8njEOKEaz

Zuck understood something the rest of the world didn't: The power of a "social graph" that could shape behavior and neutralize competition. @ashk4n: "But it’s not the innovation he’s getting dinged for. It’s that he was kind of an asshole in the way he wielded that knowledge"

This is huge!! Have you been harmed by Facebook’s illegal behavior? Let the world know! https://t.co/xema2wgWMF

"This is revisionist history. Antitrust laws exist to protect consumers and promote innovation, not to punish successful businesses." pic.twitter.com/zAAH3JYYQD

Of course, they WERE anticompetitive. We know, because Zuck - who specializes in tripping over his own dick - sent out memos extolling the acquisitions' anticompetitive advantages, proving he hasn't learned a thing since he traded incriminating IMs about founding FB.

Very proud of the Facebook antitrust complaint drafted by my former colleagues at the New York State @NewYorkStateAG -- it obviously took extraordinary amounts of work. Who said the States don't matter? Have a read: https://t.co/qWmxchz8EW

I applaud this effort to end Facebook’s monopoly. Their greed knows no bounds, and they’ve used their power to try and control too much of political and economic life all over the world. The only thing that will stop Facebook is to say “enough is enough” and break it up. https://t.co/lRaqvNwj3T

#BREAKING: I'm leading a bipartisan coalition of 48 attorneys general in a lawsuit against @Facebook to end its illegal monopoly.

We are taking action to stand up for the millions of consumers and many small businesses that have been harmed by Facebook’s illegal behavior.

A major mistake that the press is making about Facebook: The FTC @FTC never "approved" the mergers of Instagram / WhatsApp. It declined to bring an enforcement action at the time. As in any law enforcement, that is irrelevant to future prosecution (See, eg, Jeffrey Epstein)

i believe what @FredWilson is suggesting here is that FTC require open API access rather than breakups -- pretty interesting idea, altho not sure the FTC knows what that really means.

still seems tough to be implement but i like the angle. https://t.co/RU72k94hvu

We're reviewing the complaints & will have more to say soon. Years after the FTC cleared our acquisitions, the government now wants a do-over with no regard for the impact that precedent would have on the broader business community or the people who choose our products every day.

"prosecutors must show that Facebook bought rivals like Instagram & WhatsApp with the express purpose of killing off the competition. Then they must argue a theoretical: Consumers and the social media market would have been better off without the mergers."https://t.co/O40eHC8U9F

For years, @Facebook has been illegally crushing competition and building a powerful monopoly.

No company should have this much unchecked power, period. pic.twitter.com/yTKXpYht4N

Saying Instagram and Whatsapp were inevitable success stories is intellectually bankrupt at best or intentionally manipulative at worst https://t.co/dP7lSG9hgZ

New: The government’s antitrust case against Facebook seeks a villain in Mark Zuckerberg. Enforcers are casting the billionaire executive, once one of tech’s most "darling superstars," as a sneaky and rapacious brawler who vowed to crush the competition https://t.co/C6cpXHJqyp

The longer this legal battle draws on, the more integrated Facebook will become with Instagram and WhatsApp, and the harder it will be to break them up. I explain: https://t.co/GvcKM9XVEF

In @WIRED, I argue the Biden administration should do more than just litigate the antitrust suits against Facebook and Google. To tame corporate dominance, the FTC should enact bright-line rules to restrict mergers and outlaw unfair competitive practices https://t.co/VbRsnQViMg

This is one that I could support.

Requiring a COMPANY login for unrelated products is foul, especially when that opts you in to a tracking network. https://t.co/G3jvO4Jbjn

Easy to forget that at the time the conventional wisdom was that Facebook was massively overpaying for Instagram in a clear sign of a tech bubble. I happen to remember because this is basically the only thing I’ve ever been right about. https://t.co/VniCJ4sP6A

This is how Facebook in particular has turned the sludge of highly-engaging swamps of conspiracy theories and tribal hate farms into gold mines. Whatever it takes to keep those eyeballs glued. Then the targeting machine mints the cash. It's truly diabolical regime.

My initial thought is "well because it's bogus" but I'm looking for a more reasoned analysis here https://t.co/MHUXZGqkps

If you feel sympathy for FB about the antitrust case, read this ... then ask yourself if a functioning democracy — the US in 1966, for example — would allow this company to exist in its current form. https://t.co/VeyAz521BG

"How do you prove people are being harmed by a product that’s offered for free? Judging by the complaint filed by the states, which is more thorough than the FTC’s, the answer will hinge on privacy." https://t.co/SIeBQmxcye via @GiladEdelman

1. Solid complaints from FTC & 48 AGs suing Facebook for violating antitrust laws -- and requesting divestitures/breakups, among other forms of relief. Hopeful that it marks yet another step forward in the growing efforts to rehabilitate antitrust laws & recover antimonopoly.

While focus is on Facebook, the ultimate remedy is to destroy the value of their monopolized access to user data: OUTLAW ADVERTISING TARGETED WITH PERSONAL DATA. It's this regime of advertising that has enabled the Facebook/Google duopoly on online ads to destroy everyone else.

Replace “Facebook” with surveillance capitalism, and its spot on.

Facebook and Google has destroyed the value in building a audience around high quality content, localized reach, or any specific niches, because their data troves have rendered even the worst content as good as the best, as long as the eyeball clock is ticking.

Antitrust enforcement is easiest when activities are illegal per se. You don’t have to prove economic harm in these instances. It becomes much more difficult to prove consumers are somehow worse off because IG is owned by FB instead of other alternatives https://t.co/Vd2V6HNcRa

#SweeneyWasRight Glad to see savvy countries like Germany act against the Oculus Quest 2 account requirement, and the States wake up with their calls to break Facebook up. @TimSweeneyEpic was absolutely right to warn us in 2016. https://t.co/43ye7qgEQW

If Facebook is forced to divest Oculus, then Oculus won't survive. Apple is about to come and to compete you need advertising-focused subsidies.

So, watch what you wish for.

What’s more, Facebook is doing similar thing, but luckily EU is taking care of this: https://t.co/snGB7MO1ce

Wife being alive will make it harder to prove husband’s murder charges. https://t.co/GqQNNGz67C

Tech companies not being monopolies will make antitrust cases harder to win https://t.co/3KxgEtNEHb

Regulators trying to restrain Facebook, Google, Amazon, Apple and Microsoft's power face a bedeviling challenge: It's tougher to make a "monopoly" charge stick to companies that are busy competing with one another. https://t.co/QPAD3Yy2Xf

We can have democracy or we can have Facebook, but we can't have both.

And you know this line of his resonated with me deeply:

Write that one on your forearm.https://t.co/ke60nIhs3D

We can have democracy or we can have Facebook, but we can't have both.

? A special issue of The Ink, on what the new antitrust case means. Featuring @matthewstoller.https://t.co/ke60nIhs3D

So yesterday I'm on the phone with @matthewstoller, asking him deep questions about his life, when the Facebook case drops.

Which is like texting with the pope when the Second Coming comes.

So I began to ask him about it, and he really made me think.https://t.co/ke60nIhs3D

What would you prefer to exist?https://t.co/ke60nIhs3D

What @matthewstoller helped me see, above all, is that monopoly is mistakenly thought of as a policy issue when in fact it represents an existential question of whether we are actually a democracy.https://t.co/ke60nIhs3D

'The Wrath Of Mark': 4 Takeaways From The Government's Case Against Facebook https://t.co/7btJ1yP5Rk

Facebook has been hit with twin lawsuits alleging it abused its power to crush rivals. https://t.co/E1LdKIPkG2

What political leaders, advocates, and scholars are saying about yesterday’s state AG @Facebook antitrust suit (including my enthusiastic 2 cents):https://t.co/B1HpDys04P

Good news, Germany is opening an antitrust probe on Facebook for requiring their VR headsets to have a FB account. I would go even further and go after them for banning offline driver installations, ensuring it's bricked if you don't connect to them.https://t.co/U5ICnA62By

Wonderful news. ⁦@Enscape3d⁩ users should not have to create a stupid effing ⁦Facebook⁩ account to use a VR headset for commercial purposes. https://t.co/dJXH7Pz20B