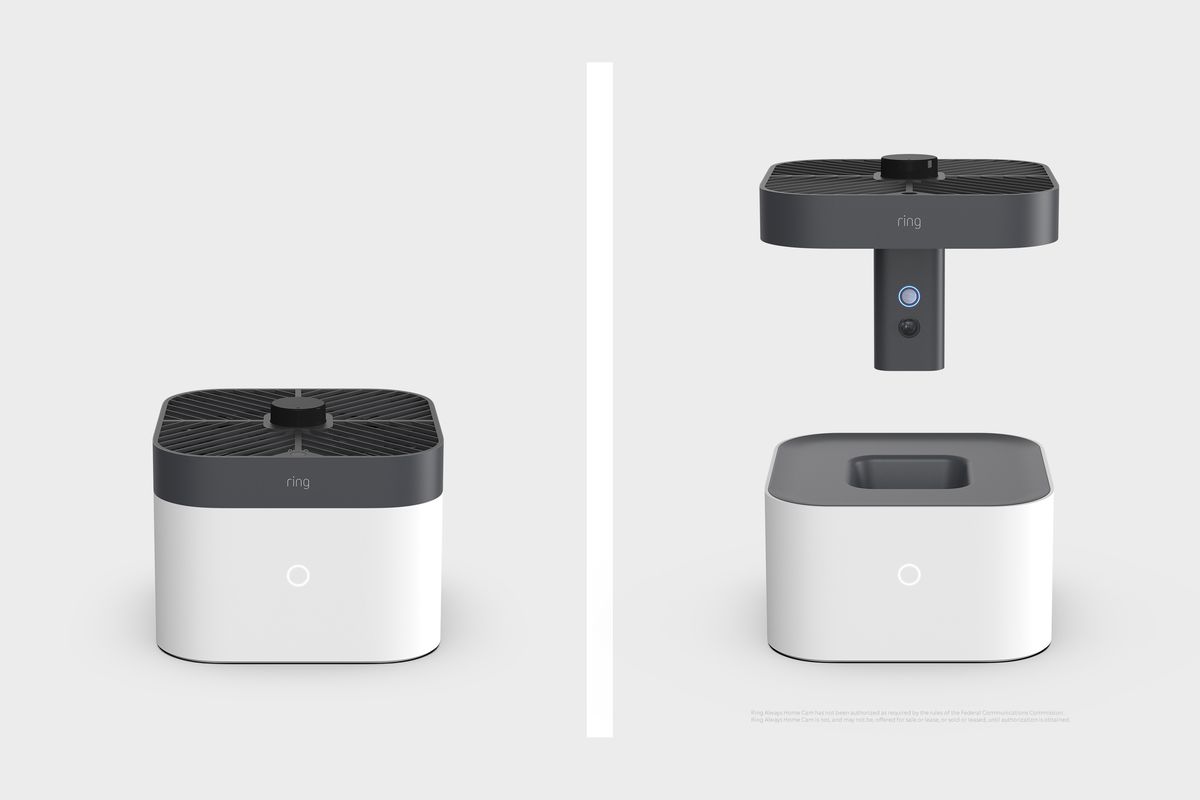 Ring’s latest security camera is a drone that flies around inside your house [www.theverge.com]

New Amazon drone is a camera that flies around and records your home [www.techradar.com]

Ring made a security drone that flies around inside your home [www.engadget.com]

Amazon Unveils Drone That Films Inside Your Home. What Could Go Wrong? [www.nytimes.com]

The Ring Always Home Cam Flies Around Inside Your House [www.wired.com]

it's telling that amazon announces products like this without addressing the harms it could cause.

people have been abused via thermostats and smart lights.... but please, buy our flying internet camera. https://t.co/exG79ZHEsI

The subscription basis of Alexa is just starting.

You are subscribing to AI power.

Ring is moving beyond home security to now protect your vehicles.https://t.co/oKhHKSAHkd

Today Amazon announced they will be developing car security cameras w/ Ring. As somebody who's had their car broken into a few times, that's pretty brilliant... and about time! https://t.co/mEqeLfwsVC

Uhh, Ring just announced a security drone for INSIDE your home. Yes, it flies around your house recording things. IN. YOUR. HOME. pic.twitter.com/IsJ0fMDrcL

Yes your own security drone in your home and Alexa controlled.

If this had a powerful laser death beam as an option I’d totally be a buyer. https://t.co/9IskTPn02K

Tweets like this, while not technically inaccurate, normalize a trillion dollar company’s capitalization on fear.

What suspicious activity inside your house? Your pet knocked over a plant. It wasn’t a burglar. https://t.co/y9MuV7xuWQ

WHAT. Ring made a drone.

The new Always Home Cam is a tiny drone that flies around your home and films.

unlimited treats for life to the first cat or dog that takes down an indoor Amazon security camera drone ?? https://t.co/VXqcfjER3p

Ok this is one of these ideas that’s either absolutely brilliant or really stupid:

Instead of getting multiple security cameras… get 1 that flies around your house ?

Amazon was one of the first companies to understand the subscription to computer power on a mass scale.

What most of Silicon Valley missed while listening to the wrong folks is that the #VoiceFirst revolution is about the subscription of AI power and thus far Amazon owns it. https://t.co/NNzmjv7MST

What’s to stop it from spying on family or neighbors?

Becoming a tool for police?

the latest season of black mirror was not what i expected https://t.co/EYGP9heoWQ

Ring’s latest security camera is a drone that flies around inside your house https://t.co/uU5bNWE7lg via @Verge // Trying to imagine testing this in a household with a cat.

Want. Unclear if it's Tesla's LTE or its own though.

The first compatible vehicles for Ring Car Connect are @Tesla models 3, X, S, & Y. Watch Tesla Sentry Mode and recorded driving footage in the Ring app over wifi or from anywhere via LTE (with an optional connectivity plan). pic.twitter.com/rbf5seP4Ep

Genuine question here: What are the legitimate use cases for an indoor camera drone? Why would someone feel they need this? https://t.co/qvXCPp0a1S

FAA rules don't apply inside your house, so Amazon can fly an autonomous drone around to spy on you or whatever.

I've seen this home drone camera idea floating around for years, but @ring just up and did it.

I'll say my usual “creepy!” to Jeff Bezos recording me, but *if* one wanted to see inside their home while away, I guess I'd prefer this over permanent installation of cameras in living rooms: you'll at least know when you're being recorded. https://t.co/MEQQ5DKXJz

Acclimating everyone to the surveillance dystopia one product at a time. https://t.co/xjybXkDLYb

Hello, this is insane and I love it more than I should https://t.co/6J8EdK6Gur

Why not just put a Nest cam in every room of your house and tweet the password? It will be just about as secure. https://t.co/zyn2TiTzRA

That thing that you'd naturally assume they had from the start https://t.co/fyokDrJD36

Honestly thought this was a cyberpunk dystopian performance art prank for a second. https://t.co/dRoTTqYnHR

My only question is can it be ceiling-mounted so it roosts like a bat? https://t.co/Mw48DwoyIM

They call it "security" and that's how they get you hooked.

Amazon is a surveillance network company now. You are the enabler. https://t.co/Retti0fhW7

Ring is a pernicious surveillance system & widespread adoption is going to cause tremendous collective harm to privacy & civil liberties. I've been trying to anticipate the next step in the function creep + normalization slippery slope shuffle. Beyond my dystopian fears! https://t.co/uKwdBymhTf

Given people are staying home... this seems like a recipe for your kids who know how to program devices to drive you crazy, especially if they can order the drone around from those cute kiddie echo dots. https://t.co/5gMD0uikLv

This is brilliant... and i know folks have done it before, but a home security drone is a breakthrough for when you’re not home.

Imagine this thing doing an hourly patrol of your home when you’re away.... just amazing. pic.twitter.com/xPvhNnBNwE

This is a way to get a 3D scan of your house. Will be very important for augmented reality glasses and shopping apps. This will be able to make an inventory of everything you own, too. I can just see the promotions from Amazon now. https://t.co/BCbRGEEuuq

If they're already inside the house literally what is the drone doing for me. Just going to tattle that my ring doorbell didn't do its job right as I'm being robbed https://t.co/3yHW1tjo0r

For that moment when you want to make sure the FBI gets every angle of your federal crime with their search warrant. https://t.co/p4RJJr1INX

what, and I cannot stress this enough, the hell https://t.co/KxnjBOLPlB

To decipher the significance of this drone, we need to look beyond its functionality. If lots of people buy it that risks further normalizing domestic drone surveillance. And if Ring can travel around the house today, future products might be designed to travel elsewhere.

This would have felt a little over the top in Minority Report. https://t.co/HKPo4JIZNa

In a country with no laws regulating digital privacy, anyone who buys this from a company with a history of privacy problems is insane. https://t.co/B7icqjB1b4

OK - so now Ring are doing a drone for your house. It flies around indoors filming!
Ooooohhh...https://t.co/zYkQ1oYyWx

a cute new pet that feeds off your private data https://t.co/MX20qE6HSh

People hacked Ring cameras and used them to spy on children in their bedrooms. Do not, under any circumstances, put an Amazon surveillance drone in your house. https://t.co/DrRq9snqN2

Potentially very unpopular thought: the drone is only slightly more intrusive than an indoor camera. And in many ways less so — because at least when you’re home, you can hear it. Cameras just have a little status light.https://t.co/bx2P2fm5qe pic.twitter.com/VNnl59AIfN

Ring’s latest security camera is a drone that flies around inside your house - The Verge https://t.co/48WI2tLMvb

Ring’s latest security camera is a drone that flies around inside your house https://t.co/aAHJe9aEB8

"Oh that? It's just the flying surveillance drone I *for some unknowable reason willingly bought and installed in my home*" https://t.co/iQrjB0Zl3v

Ring’s latest security camera is a drone that flies around inside your house $AMZNhttps://t.co/HiniuGyn9Z

Ring made a security #drone that flies around inside your home https://t.co/a8u2E4JFOv #tech #feedly

Ring made a security drone that flies around inside your home https://t.co/26I2bKZDFO @engadgetより

OK - so now Ring are doing a drone for your house. It flies around indoors filming!
Ooooohhh...https://t.co/zYkQ1oYyWx

Ring has announced a new drone camera that autonomously flies around your house while you're not home, monitoring it for suspicious activity. Not sure how I feel about it but this thing would make my dog go bonkers. It will be available next year for $250.https://t.co/aGjatHbc67

You know that expression "What the flying f*?!" https://t.co/mJgZ2aLlh8

As if #Alexa listening to everything you say and phoning the mother ship wasn’t enough. Now they want a mini spy drone flying around filming your house from the inside. Anyone buying this has zero privacy left. https://t.co/oF53sXGgRQ

Amazon Unveils Drone That Films Inside Your Home. What Could Go Wrong? https://t.co/R6sEQypGwK

We're too far gone beyond the pale of parody, friends https://t.co/w8YHa3mDoV

#Amazon Unveils Drone That Films Inside Your Home. What Could Go Wrong? https://t.co/KJ2b5fBHQx

"If the rummaging racoon, the intruder, or the erosion of civil liberties doesn’t wake you up at night, the drone will." ICYMI, @LaurenGoode on Amazon's autonomous flying in-home surveillance system https://t.co/iXdSCj9y7r

Now, in 2020, a home surveillance drone conceived of just fourteen months ago seems both more prescient and problematic. Who, exactly, is the technology going to help the most? To put it bluntly: What happens if the intruder is also the police? https://t.co/BYB4GAD2ex

This would drive my cats absolutely batshit.https://t.co/djLaQ0XoGg

Thinking about getting this just so I can watch my cat take it down out of the air https://t.co/PCSC4U363c

Protesters shouting they know they’re being watched. “Come off that roof,” one man shouted. https://t.co/bf0wsHwYcE pic.twitter.com/PgbqrybefY

We are so fucked on-the-fly!! https://t.co/dviXlZdH8c

Amazon has unveiled a drone that films inside your home. What, indeed, could possibly go wrong? https://t.co/Ibq893zVQe pic.twitter.com/8M7MusFVQu

Privacy: Amazon Unveils Drone That Films Inside Your Home. https://t.co/rJVvYT91Qp

"Amazon’s Bizarre Home Drone Flies Around Inside Your House"https://t.co/RjImU1dFJf

This is toted as a security thing, but you KNOW that 9 out of 10 buyers will get it to entertain their pets. (Maybe 10 out of 10.)

Amazon's new drone reminds me of something @pierce used to say: the company's dream is to deliver you a new light bulb the very moment the old one goes out.

Now, with possible video of all your broken lightbulbs, the dream gets closer.https://t.co/tYXPSflVlx

Who got the last round of PPE loans?@SpeakerPelosi's husband, Paul Pelosi's EDI Associates and Piatti Restaurant Company received $2.4 millionhttps://t.co/Euf9CQcnuc https://t.co/FRyNPMR2ZT

“The system as a whole has failed her” words from Breonna’s mother, Tamika Palmer, read by aunt Bianca, with attorney Ben Crump. https://t.co/bf0wsHwYcE pic.twitter.com/N1f5sp40L2