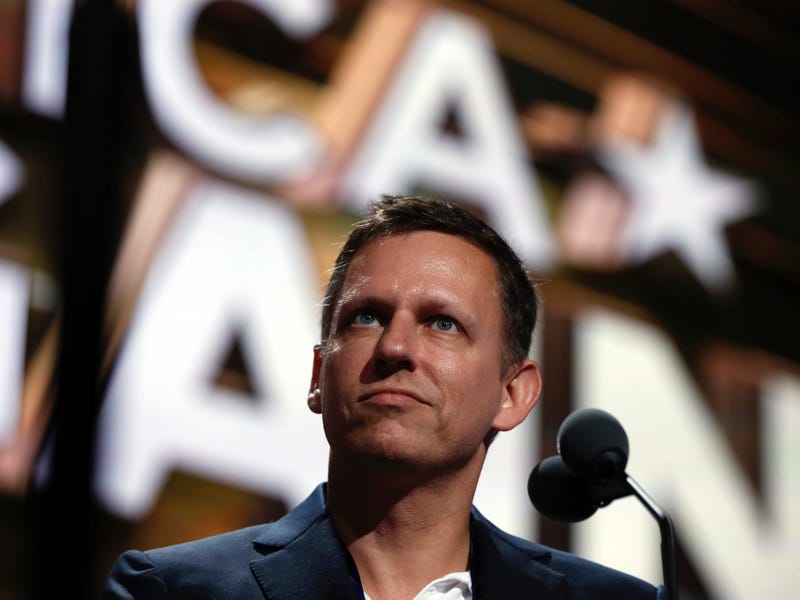 The only thing you need to know about Peter Thiel is that he spent a good portion of his childhood in apartheid South Africa and the main thing he got out of it was that... school uniforms are oppressive. https://t.co/N7yCon8NPX pic.twitter.com/hgNJUOvoFo

“One avowed white nationalist privately speculated that Thiel’s money and influence could have made him ‘our George Soros.’” https://t.co/gkNcWY2omT

Peter Thiel, the billionaire Trump donor and Facebook investor, has been enthusiastically palling around with Nazis. Blockbuster story from @RosieGray and @RMac18 https://t.co/0AaRjaWJw5 pic.twitter.com/KcEoMFzmez

If you’re working at @facebook, you should be pressing the executive team to comment on why they have Peter Thiel on the board after having friendly dinners with white supremacists. https://t.co/yTzKKFjjxU

"Kevin – really enjoyed meeting you last night. I may be in DC towards the end of September, and let me know [if you] make it to SF anytime!"

DeAnna has called an ethnostate “the great dream of the White Republic.”

It speaks to the utter moral bankruptcy of the Key government that we let Thiel buy New Zealand citizenship https://t.co/CwRM27r6NB

Facebook is a safe haven for white supremacists for a reason. It is not by accident. And people need to stop approaching Zuckerberg as such. Thiel is a eugenicist. Of course he did this. https://t.co/YWZEbZPqF6

So anyway this is the @Facebook board member whose company, Palantir, is all over the U.S.-Mexico border, and which appears to be leveraging disinfo about the border spread on Facebook for profit. 🤔 https://t.co/BEJDj4Q6F6

I didn't think I could think less of Peter Thiel, but if 2020 has taught me anything, it's that the nadir of horrible behavior by horrible people is always at a much lower altitude than I think it is. https://t.co/7OJtrEqXFT

Peter Thiel was born in Germany. His father, Klaus Friedrich, was born in Germany in 1938, which means Thiel’s grandparents were German adults during World War II. His mother, Susanne, became a US citizen but father did not. https://t.co/kzzhnGzl7v

If ANY other board member in ANY other company was dining with white nationalists and extremists like Milo Yiannopoulos, they would be out.

Facebook board member Peter Thiel "hosted a dinner with one of the most influential and vocal white nationalists in modern-day America" and then "emailed the next day to say how much he’d enjoyed his company." https://t.co/omQWl2kI2e

Facebook employees are now asking the company to comment on our story. "It would be great to get a response to this," a worker wrote on an internal message board, sparking a debate.https://t.co/CDjON4qZO7

Facebook claims (https://t.co/gAQtMdmq2T) in their polices: "We do not allow hate speech on Facebook because it creates an environment of intimidation and exclusion and in some cases may promote real-world violence." But they won't comment on Peter Thiel: https://t.co/LdAarWYzfz

These are the members of the @Facebook board of directors that should be asked if they’re okay with Peter Thiel now. https://t.co/O1HUxG5npi

My reporting in 2017 first hinted that Peter Thiel was “fully enlightened” by the white nationalist fringe. Now @RMac18 and @RosieGray have the utterly damning receipts https://t.co/aoQTT40uTl

This is so gross and fucked but a reminder of the strong underbelly of authoritarian white supremacist leanings right in our own backyard. It’s hard to stomach but critical reading for us in technology.

Thiel is a Facebook board member. He's the chairperson of Palantir, a multibillion dollar gov contractor that's going public this year. Both companies declined to comment on his activities associating with white nationalists and racists.https://t.co/CDjON4qZO7

Facebook declined to comment pre-publication when we asked what it thought about board member Peter Thiel hosting a dinner for avowed white nationalist Kevin DeAnna.

After publication, they have once again declined to comment.https://t.co/CDjON4qZO7

One employee writes in defense of Thiel: "As an employee I don't want my company commenting on the private and/or political lives of its employees."

Another argues back: Thiel is not an employee + there's a difference between a low level employee and public figure board members.

Beyond that, the story details what Thiel has been doing the last 4 years. He's moved to LA. He's had a kid. He's taking Palantir public. He wants to leave Facebook. He met with Pompeo before an anti-China speech in Jan. And he's backing away from Trump.https://t.co/CDjON4qZO7

When I was writing “The Ideas Industry” and talking about plutocrats who think they are intellectuals, Peter Thiel was my exemplar. All of his pathologies are on display in this @RosieGray story. https://t.co/NhoLHKMzKW

Surprised no one at Facebook yet brought up how Thiel is actually a philanthropist for intentionally bankrupting news organizations he doesn’t like. Seems like a winning argument. https://t.co/w5VZpBm2rX

A terrifying and important story. Peter Thiel is one of the most powerful people supporting explicit white supremacy and white nationalism in the world https://t.co/qQH27TYRbP

Emails show that Thiel hosted a dinner with Kevin DeAnna, founder of Youth for Western Civilization and prolific author of pseudonymous white nationalist writings, the same month that he spoke at the RNC in 2016: https://t.co/VGZrWhFu2t

“As the economy tanked and millions got sick, Thiel became furious, as first reported by the Daily Beast. Two people close to Thiel have confirmed that the pandemic was a breaking point for the technocrat, who once hoped electing a political outsider would disrupt bureaucracy...” https://t.co/AuGMCgL8I9

Facebook employees: Rather than demand the company fire Peter Thiel from its board or denounce him, use your leverage to insist he do a town hall Q&A with you to answer questions about his views on immigration and white nationalism. https://t.co/cgPaT6DmN1

I have an NDA that keeps me from saying what I want to say about this lol https://t.co/NiUdCX5wub

The summer Peter Thiel announced his support of Trump and spoke at the 2016 RNC, he also hosted a dinner for one of the most influential white nationalists in the US. This is how Thiel courted racist and white nationalist elements over the past four years.https://t.co/CDjON4qZO7

This reporting is really important. What’s wild to me is inclusion advocates, especially women of color, across Silicon Valley have been telling folks how deeply in bed Thiel is with white supremacists for a long time. https://t.co/JgFn3Ctc8U

Another FB employee: "There is a concerning amount of defending white supremacists/supremacy in these comments."

Oh, so right when he was spending a quarter million to get Hawley elected MO AG. interesting https://t.co/JRf265OKDw

People have been shouting about this for years; I’m hoping it being covered by major media drives accountability. But understand some of the most powerful people in tech openly embrace white supremacy. https://t.co/kvAbW4q9Db

Co-founder of PayPal, Palantir Technologies, Founders Fund and Facebook hosted a dinner for White Nationalist as part of the preconvention glide path to the Republican National Convention https://t.co/CeGk08YezZ

He “played a key role in channeling white nationalist ideology into the emerging alt-right,” Per this article.