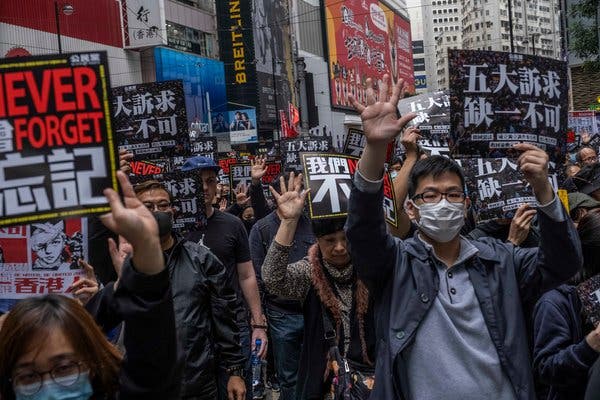 Wow thanks @Jack! We have been begging for this for YEARS! #opDeathEaters https://t.co/UZUrzN8OEUhttps://t.co/SiD8ITe8nx

Twitter announced that it had shut down more than 170,000 accounts tied to the Chinese government. Experts working with Twitter who reviewed the accounts said they pushed deceptive narratives around the Hong Kong protests, Covid-19, and other topics. https://t.co/NMecCZBml6

Downside of the great firewall: You can't exert influence over companies you've locked out of the country. https://t.co/aLOcVWCGxK

Grateful for our team's work, focus, and for the collaboration with our partners at @ASPI_ICPC and @StanfordIO. Detecting and disrupting disinformation around the world is critically important to us all.

Full details on today's disclosure are on our blog: https://t.co/tknsvAetQB

Amazing. Reminder if China wants Chinese voices on Twitter, it could unblock Twitter. One way Twitter identified coordinated campaigns linked to Beijing was by looking at accounts signing on to Twitter from IP addresses within China that were not blocked by the Great Firewall. https://t.co/4UpjQqD9Gg

170,000 ?? accounts on @Twitter.
Not to mention ??‘s spokesperson & Hu Xijin & ?? state media.
And they fan the flames of US riots, never underestimate ??’s influences in cultivating a “Communist Revolution” IN US. https://t.co/ENn5dTTdW5 pic.twitter.com/xzZVMn9sZh

We’re disclosing new state-linked information operations to our public archive — the only one of its kind in the industry. Originating from the People’s Republic of China (PRC), Russia, and Turkey, all associated accounts and content have been removed. https://t.co/obRqr96iYm

Twitter announced Thursday that it had shut down more than 170,000 accounts tied to the Chinese government. The accounts were "spreading geopolitical narratives favorable to the Communist Party of China." And this when Twitter is blocked in China! https://t.co/83fMDwupBX

Twitter removes more than 23,000 accounts it says are part of a Chinese Communist Party information operation. Aim is to undermine power of Hong Kong protests and restore lost legitimacy over handling of covid19. @annafifield @lizzadwoskin https://t.co/dpD7vhpGWU

This time, 170,000+ #WuMao fake accounts were culled. Do not underestimate #China's overseas propaganda efforts on spinning #Coronavirus and #HongKongProtests. https://t.co/eu0Bjuc7Vb

?? Today Twitter announced a takedown of a network of 23,750 accounts attributed to the PRC ??, with technical indicators linking the operation to the network suspended in August 2019. SIO participated in the analysis. Report: https://t.co/2zQCbeHIjz

This is big. Twitter is removing accounts from China, Russia, others that are essentially trolling platforms pushing agenda, not unique individuals engaging in dialogue. Kudos to Twitter for identifying these accounts and taking them out. https://t.co/grcRpYGOYj

The Chinese propaganda apparatus on social media is vast. If you want to understand Hong Kong, read Hong Kong sources. Don't fall into the trap of disinformation. https://t.co/tEJ3LeDwOP

Fergus Hanson of @ASPI_org: “While the Chinese Communist Party won’t allow the Chinese people to use Twitter, it is happy to use it covertly to sow propaganda and disinformation internationally." https://t.co/dpD7vhpGWU

Wow. And this is why being here, no matter how hellish it sometimes may be, is way better than being on Facebook. https://t.co/fzXq7EhQTd

Important to also note-- according to @nytimes-- that fake accounts from China “amplify pro-Beijing messages” while trying to discredit Trump.https://t.co/h3CogAEs0n https://t.co/r4A9fSO0jU

Disclosing 32,242 accounts to our archive of state-linked information operations https://t.co/rgQshVC4yS

Excellent new report:
“To deflect attention from its early mishandling of a health and economic crisis that has now gone global, the CCP has unashamedly launched waves of disinformation and influence operations intermingled with diplomatic messaging” https://t.co/fvnn3GfSLJ

Twitter takes down thousands of accounts that were pushing propaganda campaigns in three countries https://t.co/koDdJ7vM41

Any opinion about them using pushing the "32,242 accounts" line and burying the actual total of 180,000+ within the details?

.⁦⁦@Twitter⁩ removed tens of thousands of accounts engaged in propaganda that were linked to Russia, China and Turkey. https://t.co/n8z1EBissJ

Twitter says it removed tens of thousands of accounts engaged in propaganda that were linked to Russia, China and Turkey https://t.co/RuL0n6AOzO via @technology

#Twitter says it removed tens of thousands of accounts engaged in #propaganda that were linked to #Russia, #China and #Turkey. ?

Twitter says it removed tens of thousands of accounts engaged in propaganda that were linked to Russia, China and Turkey https://t.co/LxwcPr39YB

Who says the Chinese Ministry of Foreign Affairs doesn't have a sense of humorhttps://t.co/aFvTNlIICj

In the Chinese government's definition, a "smear" is any information that accurately describes the rounding up and imprisonment of a million Uighurs, Tiananmen Square, Tibet, democracy, human rights, etc. https://t.co/jfwvvUJvSj

Twitter Removes China Misinformation Campaign: after I published the #KarakaxList, a major state media smear campaign against me ensued, and was amplified by 100s of suspicious accounts, including one that impersonated me. https://t.co/ETXA6enEPg pic.twitter.com/p3lcvuEurU

"Until early February, for example, the Twitter accounts accused Hong Kong protesters and pro-democracy activists of overhyping the threat of the virus and using rumors as 'panic bullets.'https://t.co/TJ9xhCHLVx

China has created tens of thousands of fake accounts that discussed protests in Hong Kong and the Communist Party’s response to the coronavirus. Twitter removed 23,750 accounts that were “highly engaged” in a coordinated effort to spread misinformation https://t.co/ZrMMi9WW8a

Delighted to see @Twitter taking Chinese misinformation seriously. Mis- and disinformation are a fundamental threat to free societies - and the CCP and Kremlin know ithttps://t.co/vTsbx2Hzf9

Twitter removes accounts that it says are linked to the Chinese government and were pushing false information favorable to the country’s communist rulers. Beijing denied involvement and said the company should instead take down accounts attacking China. https://t.co/dOxhj0zWx4