'Silence is complicity': Facebook workers speak out after Zuckerberg refuses to take action against Trump [mashable.com] 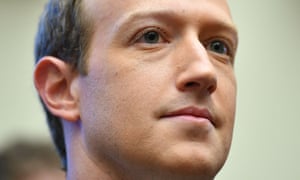 Oh, isn't that sweet. Trump and his BFF Mark Zuckerberg shared a private phone call, as Trump declared war on Twitter after it posted a warning on his tweet that broke Twitter's rules against "glorifying violence." We know what side you're on, Zuckerberg.https://t.co/hnq7GaO3Zz

I will reiterate: I don't wish to eat all, or even 99%, of the rich. But I'll tuck into a sacrificial dinner of Mark Zuckerberg. cc @facebook you fucking awful motherfuckers.https://t.co/EnKqJasmZu

Facebook employees are staging a virtual walkout, in a rare public display of criticism, the NYT reports.

If you’re going to stay at a company you have problems with, this is the way to do it. The most important question to ask yourself if you’re in this situation is “will ME staying result in things getting fixed?” If you can create causation, stay & fight. If you can’t, move on. 👊 https://t.co/2rkVyNLADl

I admire this Tweet but unless Jason and his coworkers quit Facebook en masse, I don't give these words any real weight. https://t.co/MIBqV4FI0H

SCOOP with @MikeIsaac, Facebook employees are staging a walkout today for the first time in the company's history. They are protesting the decision by Zuckerberg to allow Trump's post to stand: https://t.co/bNqso94eJn

FB employees have now rejected "internal debate" and are speaking out publicly. 👏 https://t.co/NzKL117XLF

I've shared others posts, but I need to be clear–FB is on the wrong side of this and I can't support their stance. Doing nothing isn't Being Bold. Many of us feel this way.

I mean, it’s a perfectly scalable solution to the goal of Mark Zuckerberg seeking favorable regulatory treatment for Facebook.

Ultimately the people who work there need to decide if this is what they want to do with their lives. https://t.co/QKhXSYXhWm

Facebook employees are requesting time off today, putting an out of office message on their emails saying they're protesting company policy, and working on a list of demands to put to management. https://t.co/cmzXk9oBw4

The worst advertisement you can have is when your ex-employees talk bad about your company and/or about you. https://t.co/EZ1n1d8bNg

Censoring information that might help people see the complete picture *is* wrong. But giving a platform to incite violence and spread disinformation is unacceptable, regardless who you are or if it’s newsworthy. I disagree with Mark’s position and will work to make change happen.

An @Axios scoop via @MikeAllen: @realDonaldTrump had a call on Friday with Facebook CEO Mark Zuckerberg that was described by both sides as productive.

The chat comes as Trump is taking on Twitter over their checks on his tweets.https://t.co/YFpabe8Ay4

Everytime I see someone employed at one of the most unethical companies on earth publicly wrestle with their personal morals, I think about just how easy it will be for them to get a six-figure job somewhere else. The rest of us made this decision by not accepting the money. https://t.co/pUae8JTt4E

Chris says what every current and former Facebook employee might be saying if not tied up in their jobs and signed papers. https://t.co/ZXtrUT43Zt

I work at Facebook and I am not proud of how we’re showing up. The majority of coworkers I’ve spoken to feel the same way. We are making our voice heard.

Trump and Zuckerberg just had a phone call "described by both sides as productive." Meanwhile, Trump's "shooting/looting" posts remain up on Facebook. Zuckerberg also made sure to go on Fox News to say he disagreed with Twitter putting a warning on them. https://t.co/qVCcGbkJix

It’s just hilarious we have to fight not trump but mark https://t.co/QTgccbsKLz

On Friday, Mark Zuckerberg wrote in a post that Facebook has been in touch with the White House to discuss its policies. Axios now reporting Zuckerberg specifically had a call with Trump, something he didn’t mention in his original post. https://t.co/jvc3Vrd9BF

Congratulations to Mark Zuckerberg and @Facebook for a productive conversation with Donald Trump!

Impressive you didn’t let his threats of violence or the wave of police terror get in the way of your pursuit of profits and monopoly control.https://t.co/160gda6SoP

Zuckerberg is cutting the same deal he did with Obama & Plouffe: No regulations on Facebook and we will do our best to help you. https://t.co/PhnEMnF2a3

Facebook employees are staging an internal walkout in protest of Mark zuckerberg’s decision to keep the President’s inflammatory posts up, despite the company’s policies on incitement to violence and voter suppression.

In the many years I’ve covered FB, I’ve never seen this kind of public criticism beforehttps://t.co/5l3CokR75M

Thank you @stirman. We need more and more of you to speak out. Change happens from pressure on the inside and from the outside. https://t.co/fJw8ZrpimX

Wait...Mark Zuckerberg is taking calls from Trump and advising him on his tone? If only Mark had an enormous platform he could use to do or say something about violent rhetoric and lies. https://t.co/HSZfA5BDDW

Zuckerberg said Friday that “we have been in touch with the White House today to explain these policies as well.” https://t.co/fA1mkYAzg2 Now Axios is reporting that the “we” was Zuckerberg himself and the president. What was said and how did it shape MZ’s thinking? https://t.co/ynqanAMi9J

You're not alone. Two dozen contacts (many friends) at FB reached out recently to talk through these issues. They're absolutely distraught about the whole situation and are coming to terms with what they should do. I appreciate you all refusing to let racism win! cc @hunterwalk

Facebook employees are staging a rebellion over Zuckerberg’s refusal to act against Trump, expressing their dissatisfaction with their boss on social media in a rare display of dissent from within the company. https://t.co/l3Qgm7HJ37

Now comes news from @mikeallen that Zuckerberg spoke with Trump on Friday. That same day, Zuck wrote that "accountability" can only happen when speech is "out in the open." In other words, anything goes. Did he not learn anything from Myanmar? /5 https://t.co/JW6hSopHF0

We’re going to be hearing this a lot.

When a company has rules regarding incitement to violence, hate speech and harassment and it chooses to enforce them, you can be assured that a decent number of its own employees have the moral fortitude that you do not and will leave. https://t.co/cW35ARj2bR

Here’s part of Zuckerberg’s post. At the bottom he says that Facebook had already been in touch with the White House that day. https://t.co/fFUeqL7jQ8 https://t.co/vRWMdkKJM1

At this point, the strongest check on this behavior (and that of many tech companies) is Facebook's own employees. When you're irreplaceable, you can afford to have debates with your boss in public. https://t.co/OQWRaWHhMD

Trump reportedly held call with Mark Zuckerberg amid controversy over protest posts Looks like Donald is developing a new relationship. Isn't that precious?https://t.co/NXw0nOPmKl

If Facebook was your sole news source, and you saw only the most popular links on the platform, you'd think that what happened this weekend was a violent, unprovoked attack on law enforcement by a left-wing terror group.

FB’s position is wrong and an insult to black people.

I believe Trump’s “when the looting starts, the shooting starts” tweet (cross-posted to FB), encourages extra-judicial violence and stokes racism. Respect to @Twitter’s integrity team for making the enforcement call.

I feel like we have a right to know specifically what gets discussed on Trump’s secret calls with Mark Zuckerberg https://t.co/5qJ3r4rrf9 pic.twitter.com/MeNE6JmHXH

Facebook rarely lets employees speak publicly about internal stuff unless approved by PR. But today, the company says: “We encourage employees so speak openly when they disagree with leadership.” https://t.co/pvNlcWUSgN pic.twitter.com/L82EHCpM4J

This is a good thread of people who should come up with a list of demands like ousting of Joel Kaplan / Thiel and figure out what they will do if not. Otherwise, we'll back here in November. https://t.co/VBQ0gsZK7d

I’m grateful for the people who believed in me and the skills I learned there, but having experience there I feel cowardly not being honest about it. It’s a very dangerous company and has done a significant amount of harm to the world, even when you consider the good parts.

given this guy’s resume, he can literally go anywhere else, and his resignation would actually mean something, but i am sure that posting about it will change things. https://t.co/0hHP0siArE

Zuckerberg's position is that "when the looting starts, the shooting starts" is something that "people should be able to see for themselves." He doesn't mention the fact that calls for violence print money for his company by driving engagement. /6 https://t.co/JW6hSopHF0

These past few weeks have been depressing and infuriating. We all deserve to live with dignity and without fear of violence. pic.twitter.com/VV9n0xTGNG

Proportional to the net worth of the average American his age, this is literally donating $1.32. https://t.co/XPhYt7IgWQ

They should keep walking.

"More than a dozen current and former employees have described the unrest as the most serious challenge to Mr. Zuckerberg’s leadership since the company was founded 15 years ago." https://t.co/6TWR7Xrl7n

There are plenty of companies that do less than great things—that's the nature of the world we live in, unfortunately. Facebook however, represents something uniquely dangerous especially with a leader who continues to show a lack of moral character.

Facebook employees are staging a rebellion over Zuckerberg’s refusal to act against Trump, expressing their dissatisfaction with their boss on social media in a rare display of dissent from within the company. https://t.co/l3Qgm7HJ37

Valuing profit over people's lives, and the status quo over doing the right thing — to Zuckerberg, money is EVERYTHING. And workers are pissed. https://t.co/O6tHNyVSU3

Facebook employees are rebelling over Mark Zuckerberg’s refusal to act against @realDonaldTrump–including Zuck's *personal decision* to leave up the Facebook version of Trump's tweet that encouraged police to shoot rioters.#DeleteFacebookhttps://t.co/0V0fWYm4ZG

Just yesterday, when #MarkZuckerberg said - #TrumpLoots comment doesn't violate FB policy, I asked - with his billions why can't he buy some BALLS

#DeleteFacebook Zuck has chosen the RW

FB employees are staging a rebellion over Mark Zuckerberg’s refusal to act against Donald Trump, expressing their dissatisfaction with their boss on social media in a rare display of dissent from within the company.https://t.co/24OrAGFf05

Before announcing that Trump's post suggesting "looters" should be gunned down would be allowed to remain on Facebook, despite the company's clear ban on content advocating violence ZUCKERBERG PERSONALLY CALLED TRUMP and had a "productive" call https://t.co/x7bSakTLkf

It turns out that, even as I was writing this, Zuckerberg was personally talking with Trump on the phone to smooth things over. Both sides described the call as "productive," per @axios: https://t.co/cl0o5Oazc5

On Friday, Mark Zuckerberg wrote in a post that Facebook has been in touch with the White House to discuss its policies. Axios now reporting Zuckerberg specifically had a call with Trump, something he didn’t mention in his original post. https://t.co/jvc3Vrd9BF

Some senior Facebook employees are publicly slamming Zuckerberg for his cowardly and shameless policy on Trump posts. https://t.co/kFZRYzf43E

Facebook's inaction over Trump's glorification of violence is wrong & Zuckerberg's own staff know it. Facebook has to act!https://t.co/jLNucJWH5o

While some Facebook employees protest Mark Zuckerberg's decision to allow Trump to threaten violence, Stanford students are protesting a professor's use of the N-word in class on Wednesday.