Twitter tests 'Fleets' that delete themselves after 24 hours [www.engadget.com] 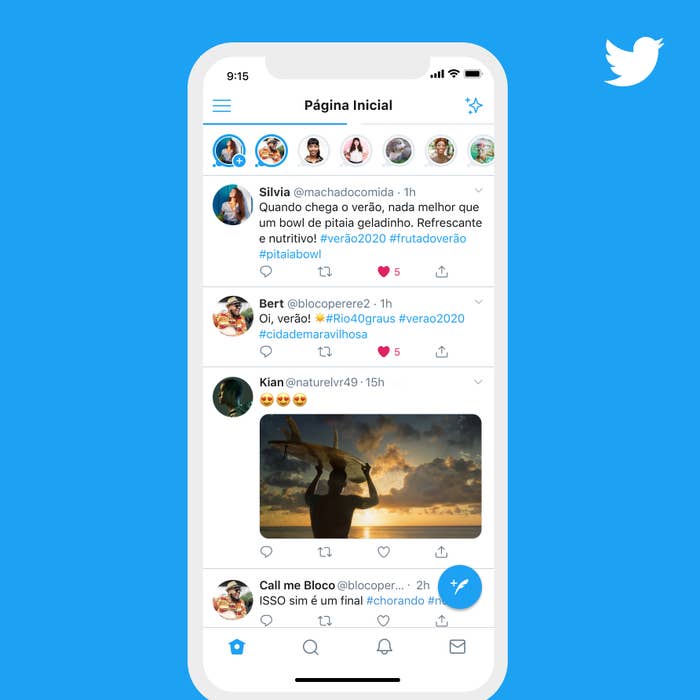 Twitter Is Adding Stories And Calling Them Fleets [www.buzzfeednews.com]

Twitter is testing ephemeral tweets in Brazil and calling them ‘fleets’ [www.theverge.com]

Twitter is testing its own version of Stories called 'Fleets' [www.androidpolice.com]

Twitter starts testing its own version of Stories, called ‘Fleets,’ which disappear after 24 hours [techcrunch.com]

Generally I think Twitter stories are a good idea. I throw away a lot of stupid stuff on Instagram that I would rather throw away here. So here's hoping it arrives in the US soon.

I expect it will — Twitter employees are testing it internally

We’ve been listening to this feedback and working to create new capabilities that address some of the anxieties that hold people back from talking on Twitter. Today, in Brazil only, we’re starting a test (on Android and iOS) for one of those new capabilities. It’s called Fleets. pic.twitter.com/6MLs8irb0c

if you screencap these are they "fleet pics" https://t.co/TpnTxoyJwH

Ephemeral tweets that immediately disappear? There's ~zero chance~ this could possibly make our current misinformation crisis worse. This is a wonderful new feature ahead of the 2020 election!! https://t.co/jcwFf9DV5q

yes we know what fleets means. thanks - gay intern

Fleets are a way to share fleeting thoughts. Unlike Tweets, Fleets disappear after 24 hours and don’t get Retweets, Likes, or public replies-- people can only react to your Fleets with DMs. Instead of showing up in people’s timelines, Fleets are viewed by tapping on your avatar. pic.twitter.com/sWwsExRLcJ

Let the fact that Twitter made a version of Stories for ephemeral tweets it’s calling “fleets” wash over you and carry you away from this nightmare news cycle. https://t.co/HtnnqfpWsw

This is real, I asked them many times and they kept saying that it is https://t.co/7bf4GKglED

Twitter Stories. They're here. You can call them Fleets. https://t.co/a3sMVcCCmc

excited to be canceled for my "ephemeral fleets" https://t.co/xFhcg4gMto

We’re hoping that Fleets can help people share the fleeting thoughts that they would have been unlikely to Tweet. This is a substantial change to Twitter, so we’re excited to learn by testing it (starting with the rollout today in Brazil) and seeing how our customers use it.

How did Mike Dudas get it before everyone else? ?

Twitter is finally starting to experiment with ephemeral content. Today, the company is starting to test tweets (“fleets”) that disappear after 24 hours. Feature is Brazil-only for now https://t.co/KgYX3B63rh

Cool, though I suspect screenshot culture will negate some of fleets' ephemeral qualities. https://t.co/lsA72jz7Yz

Twitter is testing “Fleets” (fleeting thoughts/tweets) that delete after a few minutes.

No No No please tell me it’s a lieeeehttps://t.co/u1vb6gfSvP

WHO ASKED FOR THISS????? Twitter Is Finally Doing Stories https://t.co/0Fk8hmAFyN

Twitter Stories. They're here. You can call them Fleets. https://t.co/a3sMVcCCmc

Stories are coming to Twitter and they'll be called "fleets" https://t.co/9IoLrZDLE6

Dumb name, but I will use the hell out of this feature. Can;t be liked or retweeted? Finally! https://t.co/jl285OxMJF

we live in hell https://t.co/7FTBlxxCYF

Twitter Is Finally Doing Stories. They will be called “Fleets”, a mashup of “fleeting” and “tweets”. https://t.co/343Tlt6O3A via @kantrowitz

I'm so excited to drop "fleets" of my breakfast and my dog and my unshaven haggard visage on all y'allhttps://t.co/ZGIJ3LSjkJ

Twitter Is Adding Stories And Calling Them Fleets https://t.co/WbE9ET7sIK

Twitter is going to allow you to post stories called “fleets” - we are living through a premium HBO comedy I swear to god https://t.co/M9ggDvtKBa

Twitter is testing ephemeral tweets in Brazil and calling them “fleets” https://t.co/1P5gFaIUH8 pic.twitter.com/wIbhj7nsFe

Now you see me, now you don't! Disappearing tweets AKA fleets are testing in Brazil. Super proud of the team for this milestone!https://t.co/kPseNHJgQV

Twitter is testing ephemeral tweets in Brazil and calling them ‘fleets’ - The Verge https://t.co/S1yiiYaXr9

Can’t wait to share intimate and fleeting glimpses of my life with the Nazis and trolls obsessed with me on this platform ? https://t.co/Wrhv7Z8exp

Impossible not to also point out this feature is just starting to be tested 3 years after Instagram pulled it from Snapchat.

Twitter is not the fast moving, mobile focused company it ought to be.https://t.co/3OsfhtwnZM

Twitter starts publicly testing its version of Stories—an idea that has been belabored internally for a long time—less than a week after it was revealed that an activist is looking to oust the CEO over business concerns and stagnant product development https://t.co/StraVLFjQC

Twitter adding stories 'fleets' to this app would be the worst update ever.. https://t.co/RX4Tl1id4b

Twitter is finally doing stories. I can't see huge numbers of people recording video of their face, as twitter is a very anonymous platform for some, but it's a worthwhile feature for them to introduce though. https://t.co/TEDgxatRF9

I wonder how our president will use Twitter's forthcoming stories featurehttps://t.co/ZGIJ3LSjkJ

Looking forward to the new tradition of Fleet Week, where we spend a week posting our edgiest opinions via fleets, realize we're all psychopaths, then unfollow everyone. The Purge. https://t.co/2nwyo3lO4C

Twitter is testing Tweets that self-destruct in 24 hours. They can't be Liked or Retweeted. Any replies go to DMs and are not public. Currently in Brazil only. https://t.co/AwRU2TBW2M

Twitter Is Adding Stories And Calling Them Fleets https://t.co/1FRfFjjeXD

Twitter is going to add “fleets” or fleeting tweets that disappear after a time. Can’t wait to see them get screenshotted. https://t.co/zWjPc08327

i think this will do wonders for shitposting without repercussions

Twitter is testing ephemeral tweets in Brazil and calling them “fleets” https://t.co/2IAsTQNiZs pic.twitter.com/c9J9xsDOjm

The key sentence here: "You cannot like or retweet a fleet." https://t.co/cAxKfR1XTm

So fleets automatically yeet when they're complete?https://t.co/4AtW6A9vd7

Let the changes begin. Stories called fleets are set to begin in Brazil. The stories will disappear in 24hrs and cannot be liked or retweeted . #wtp2020 #wtpTEAM #wtp_2020 https://t.co/VCj581PC1O

Hmmm.... Exactly what is this leading to? Twitter starts testing its own version of Stories, called ‘Fleets,’ which disappear after 24 hours – TechCrunch #MAGA #KAG https://t.co/UUJkpdfKYY

It's rare that you read an article composed entirely of sentences that each make you want to vomit.https://t.co/Unoapb7ixh

Twitter testing its version of Stories, called "Fleets", will begin testing in Brazil. Twitter’s test arrives soon after activist investor Elliott Management Corp. took a stake in Twitter to push for changes at the social network.https://t.co/trjunmONYb

& they
WON'T show up
in search/moments.

Twitter is testing “fleets” —tweets that disappear after 24 hours. Would you use this function?

I would for newsy stuff I have no need to save for later. https://t.co/Vq5BDnb2ZZ