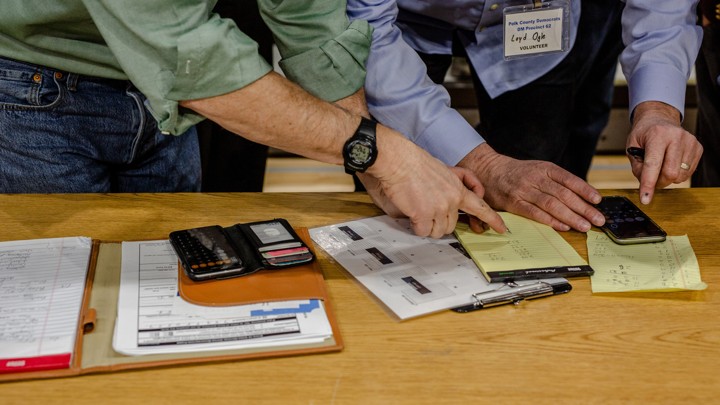 How a Bad App-Not the Russians-Plunged Iowa Into Chaos [www.theatlantic.com]

The Nevada caucuses won’t use the Shadow app, per the state Democratic Party [www.vox.com]

Iowa caucus: The Shadow app played a role in the voting debacle [www.protocol.com]

as usual, @max_read is very smart on this. Everything's networked in the sense that institutions all play off each other and many of them are broken and sputtering and making each other worse https://t.co/4BOmbXiIwA pic.twitter.com/DDtXKZx3RI

To understand why shadow exists and how they failed to provide the tools the Iowa Democratic Party needed we need to know how this space works.

this piece tells the same story; people in power realizing they can’t win on merits and so creating as much confusion as possible to give themselves lots of gray area to interpret in ways that are favorable to them is an old and sad tale https://t.co/aWc3SpV2H9

The fundamental problem is we’ve got a very broken way we fund campaign tech on the democratic side of the isle in the US. There is tons of money in politics but it doesn’t get used in the way which builds anything sustainable. Here are some reasons why.

Hopefully tonight’s chaos in Iowa will persuade Democrats to no longer kick off this process in Iowa. The whole thing is ridiculous and archaic and unrepresentative. https://t.co/ykjbdGDRyn

also, naively... building a custom app seems horrifyingly and needlessly complex based on a bad set of up front assumptions and decisions ?? https://t.co/vwiuoIrtjb

dude we’ve given grants to college kids who can build better working apps in a weekend, don’t turn this incompetence on “tech” https://t.co/MytISBspz7

They messed up, but here’s the thing, shadow is a company which came out of of the collapse of another electoral tech company, Groundbase (https://t.co/yAND0Z9jR1) which has some well known folks in the campaign tech space.

WARNINGS IGNORED: The Iowa Democratic Party barreled ahead with the use of an unvetted, undisclosed mobile app despite admonishments from security experts. DHS offered to test the app, but was turned away. 1/ https://t.co/zpk5omWM3H

As the Iowa Democratic Party has confirmed, the underlying data and collection process via Shadow’s mobile caucus app was sound and accurate, but our process to transmit that caucus results data generated via the app to the IDP was not.

Dem group behind Shadow distanced itself from the Iowa caucus developer. But they share office space, briefings & resources. The team is made up of former Hillary campaign staff tied to Mayor Pete and have privately expressed hostility to Bernie https://t.co/dzVwXc8eOw

My warnings about this technology were ignored, and the result is chaos and a loss of confidence in our elections. Unless states step back from using unproven technologies in our elections this will keep happening. https://t.co/gAjV2kJJjB

'Make sense of it' ? this is tech working as intended -- complicating processes that would otherwise manage just fine ? https://t.co/8TesRkJ2OS

given this information, it’s pretty amazing that the app was even used in the first place https://t.co/be19G78gzv

Sen. @RonWyden's office asked the DNC three times about details regarding the app during the run up to the Iowa caucuses, but received no reply, an aide to the senator said. https://t.co/zpk5omWM3H

Shadow is an independent, for-profit technology company that contracted with the Iowa Democratic Party to build a caucus reporting mobile app, which was optional for local officials to use. The goal of the app was to ensure accuracy in a complex reporting process.

Shadow made some tools which look useful, their messaging app is similar to hustle and https://t.co/l0OjQn2cDf. Their lightrail app https://t.co/ZG9oHQPDsO is something people really need.

This is a really detailed account of specific companies and people and decisionmaking involved in campaign technology, including a lot of stuff on Shadow and its history, I think it's useful when a lot of people are just guessing and making "I bet" and "sounds like" jokes https://t.co/cc6LStdGoy

At its core the Democratic Party is about connected insiders making money from overly complicated solutions to nonexistent problems https://t.co/Md0yaCSPFj

Here's the explanation you want to read of the Iowa Caucus tech failure, written by the 1st engineer at the company that built Twitter years ago and a very politically savvy person. https://t.co/ERTGTh1lbQ

-Was engineered in just the past *two months*

-Was not tested at statewide scale

-Was not vetted by DHS's cybersecurity agency

Iowa serves a key purpose: reminding us we must have paper records. Despite a coding error that caused partial reporting (a problem caught before results were released) “the party has been able to verify the vote counts thru required paper documentation.” https://t.co/yoR6bfE8FH

This is such an illuminating thread that captures the complexities of campaign tech, the funding behind it and the persistent difficulty in finding long-term solutions for improving campaign tech on the left. https://t.co/sBe5sosXDg

This is a tremendous thread with great insights into what really happened with the Shadow app in the Iowa caucuses. https://t.co/B4DNtCwX2e

Importantly, this issue did not affect the underlying caucus results data. We worked as quickly as possible overnight to resolve this issue, and the IDP has worked diligently to verify results.

Collecting all the data, but not fully displaying it? That’s a hell of a showstopper bug to find in production. https://t.co/kESWgvkk9e

Took a look at the various disinfo campaigns swirling around Iowa yesterday w/ @JasonAbbruzzese. Takeaway: We don't need foreign interference to show us our 2020 vulnerabilities. Americans were perfectly capable of spreading disinformation on our own. https://t.co/VxdHNzyJHB

.@nkulw talked to an Acronym staffer, who spoke under condition of anonymity because of a non-disclosure agreement, who said it's “far and away the most disorganized place I've ever been a part of.” https://t.co/aKNXXxWjoM

What shadow, groundbase before it, and many of the rest of us like affinity and groundwork (similar name I know) all want to do is solve the problems which come up in progressive campaigns. We’re trying to create tools for the organizers.

“In the end, only one-quarter of the 1,700 precinct chairs successfully downloaded and installed the app, according to a Democratic consultant who spoke on the condition of anonymity to avoid losing work.”https://t.co/1n2py8qQYY via @NYTimes

I visited Shadow Inc.’s address listed in the Iowa Dems’ disclosure filings. It led to a WeWork in this trendy Washington alley (steps from Maydan and La Colombe). But a receptionist told me Shadow moved out last month to an unknown destination. ??? https://t.co/ERglplfPqP pic.twitter.com/6kOaHjpAQ6

"Why bother hacking the system? Anything developed this rapidly that has not been properly stress-tested—and is being used in the wild by thousands of people at the same time—is likely to crash the first time it is deployed." https://t.co/hRERo8OsE9

New piece from me: Who needs the Russians when elite arrogance, matched in magnitude by their incompetence, can screw things up this badly? If only it were the Russians! That'd be easier to fix. Worse, there was no need for that damn app. Yes, I'm furious. https://t.co/xc2bm81VoE pic.twitter.com/VPr0G8tSLc

Apparently we’re opposed to Russia meddling in our elections because that’s our job. #BernieWon https://t.co/ShRp56AnkW

"Worried about Russian hacking, the party addressed security in all the wrong ways: It did not open up the app to outside testing or challenge by independent security experts" https://t.co/OcVpYxatx0

"If the Russians were responsible for this confusion and disarray, that might be a relatively easy problem to fix. This is worse." - BKC faculty associate @Zeynep Tufekci in @TheAtlantic ⬇️⬇️ https://t.co/sKbSSBZLGf

Election apps crash with some regularity. That doesn't mean parties, campaigns or election officials have learned when and how to deploy them. [@zeynep — @TheAtlantic] https://t.co/QvIIMXBMuU pic.twitter.com/hN1toGvIDc

the general sense of "post-truth" isnt russia or deepfakes it is institutional rot. legitimacy has been sold out, forfeited https://t.co/CotbNkLNv7

Even The Atlantic managed a good take on the #IowaCaucusDisaster. https://t.co/jimj9XB1Xb

“Some Sanders supporters...suspected that this was designed to trip up the momentum their candidate expected from his anticipated win. (To which I can only say: The DNC isn’t competent enough to pull off such a plot.)” ⁦@zeynep⁩ layin it out. https://t.co/iyI4qI0Pc0

The Nevada Democratic Party says it will find a new app for its February 22 caucuses https://t.co/SKS8fx05gr

The Nevada caucuses on Feb 22 will diverge from the #IowaCaucuses in few noteworthy ways.

For one, they are dispensing with the app that caucus captains struggled to use on Monday night. https://t.co/gLaAhCStPN

The Iowa Democratic Party is saying coding issues in a new app are to blame for the failure to report any official results in the #IowaCaucuses.

Party officials are now scrambling to avoid a similar fate in the Nevada caucuses. https://t.co/iI9JVEclCR

He complained about Democrats’ tech ‘morass’ — then built the Iowa app. @issielapowsky with a textbook example of why you should keep your old interviews. https://t.co/yQAyOTD0rM

The CEO of Shadow, which made the Iowa caucus app, complained to me last March about the “tangled morass” of Democrats’ tech infrastructure.

What a difference a year makes.

Read all about it in my first (❗️) story in @protocol which is now live (‼️) https://t.co/XPBUwv9DKE

this is why you should always keep your interview notes, even after the story is published and you've moved onto another job! https://t.co/D8yOYmGZVZ

Welcome our latest member of the family: Protocol. Today’s scoop: He complained about Democrats’ tech 'morass' — then built the Iowa app https://t.co/PJu3os40rc

My sister’s new site launched! Their story on the app that ruined the Iowa caucus is so good https://t.co/9e1IOONJTn Follow @protocol and @EmilyDreyfuss

"Campaign strategists must commit to technology early ... New apps should not be built in the final stretch, and volunteers should not be asked to make a download on Caucus Day." https://t.co/MLAml61awn

When big news breaks and the interview that every hack is jonesing for is already teed up in your notebook. Must read on Iowa app snafu by @issielapowsky https://t.co/d0dyCHfiil

Iowa app built for a $60k budget. I think we charged more than that for a ghost detector ~15y ago, also had more reliable results. https://t.co/2gidknsHlX

In today’s newsletter, after Iowa I keep thinking how we’re less literate about how apps work than we should be. We’re more literate about misinformation, algorithms, encryption, and privacy ...but do you know what TestFlight is? Maybe you should. https://t.co/hxRnViroTE pic.twitter.com/vhF26ZKSsE

This by @backlon on the obvious signs of disaster around the Iowa caucus app is essential reading - anyone paying attention would have seen it coming a mile away, but we are conditioned to not pay attention to computers anymore https://t.co/LotEgW9eJz pic.twitter.com/jFtrEiip8v

I know I'm harping on this but as a web dev person, everything about this story gives me an ulcer. I've rolled out projects for new soda flavors that had more levels of vetting than something that could determine the course of a Presidential nomination https://t.co/ULUsDdBkB2

The most Dieter thing ever is using "fracas" in a headline (don't get me wrong: it's a great word, @backlon) Iowa’s caucus fracas shows we’re still too ignorant about how apps work https://t.co/YUYoLxSHr7 via @Verge

Yeah more's coming out on how they did it too (algorithm systems that manipulate the will of the people).

It's starting to look more like a sci-fi series than a reality. ?https://t.co/2fkZ9wRJUH

"Election security experts and campaign tech veterans say the meltdown in Iowa represents a systemic failure within the Democratic Party, and a study in how not to roll out technology in future elections." Don't miss this @issielapowsky story in @protocol:https://t.co/7x6bWZtOX8

Hope you’ve done your homework on this one and read this @protocol launch story! :) https://t.co/EbRYpxpZZ1

Before you start spewing about deep-state collusion & a corrupt party, read this & educate yourself on just how dumb US politicians are when it comes to technology. Tech literacy is no longer a hobby, it’s a requirement #MichaelDoesPolitics https://t.co/0fli3SUi2T