It Seemed Like a Popular Chat App. It’s Secretly a Spy Tool. [www.nytimes.com] 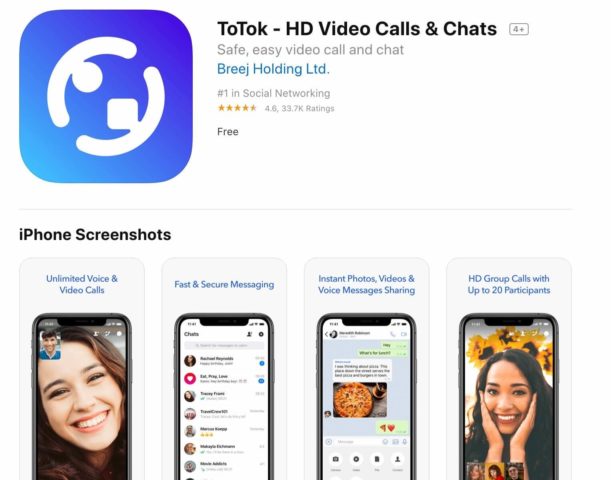 You are being watched: Smartphone users must uninstall this popular messaging app [www.ibtimes.co.in]

ToTok is a UAE spying tool, say US officials. Delete it now. [boingboing.net]

Google and Apple have removed an Emirati messaging app called ToTok amid claims that it is used for state spying. https://t.co/7sf9dMWly8

New York Times reporters were told that this popular messaging app was secretly an Emirati spy tool. They asked Apple and Google for comment. Both removed it from their app stores https://t.co/VJFx2VIQdp

"It is billed as an easy and secure way to chat by video or text message with friends and family.

ToTok, is actually a spying tool used by the government of the UAE to try to track every conversation of those who install it on their phones."?
https://t.co/xd9a2bvG2z

Delete the messaging app #ToTok! Gov't of #UAE uses the app as a spy tool to track every conversation, movement, relationship, appointment, sound & image of the millions of people who install it on their phones. https://t.co/cG0fps58xz#FLDDigitalProtection #Digital_Protection pic.twitter.com/rWklNJJnpf

"the company is run by Andrew Jackson, an Irish data scientist who previously worked at Palantir, a Silicon Valley firm that works with the Pentagon and American spy agencies" https://t.co/MtedgNUxYR

ToTok claims it was removed from the Apple and Google stores for a “technical issue.” It was removed because of our story: https://t.co/xCNqD0EGhH pic.twitter.com/flXDhsiWst

We wish people would understand what's actionable *for them* in this sort of story: If an app asks for overly broad permissions, uninstall it. Yes, no matter how cool the thing it promises to do is.https://t.co/3TaITspTy1

ToTok, a messaging app that as of last week was one of the most popular in the Apple and Google stores, is billed as a secure way to chat by video/text message with friends/family

But it turns out that it's actually a spying tool for Emirati intelligencehttps://t.co/z6cUmatgm7

New: A massively popular app that has been downloaded millions of times is actually an Emirati spy tool @MarkMazzettiNYT and I confirmed. https://t.co/AO3rkENYmh

'A technical analysis and interviews with computer security experts showed that the firm behind ToTok, Breej Holding, is most likely a front company affiliated with DarkMatter, an Abu Dhabi-based cyberintelligence and hacking firm' https://t.co/YtEmJTpp1q

The UAE created a messaging app just to spy on people who use it. ToTok has been downloaded millions of times including in the US. https://t.co/ac6nE5kPMf

It Seemed Like a Popular Chat App. It’s Secretly a Spy Tool. https://t.co/1n6phZY1zO

Delete #TOTOK NOW “ToTok, is actually a spying tool, It is used by the government of the #UAE to try to track every conversation, movement, relationship, appointment, sound and image of those who install it on their phones” https://t.co/i3qXY5h79c

The “Year of Tolerance” ends with a malicious app. https://t.co/E7PgBTgTxf

The Conversation ends with a guy in 1974 shredding what's left of his life because of his fear someone might have planted a listening device in his apt. in 2019 we all just walk around with like 15 different intelligence agencies in our pocket https://t.co/1bmtqHNdli

From the @nytimes newsroom: "ToTok is a cleverly designed tool for mass surveillance," @MarkMazzettiNYT, @nicoleperlroth and @ronenbergman report https://t.co/1gEVN0F7fH

If the UAE is such a stable/moderate/liberal/tolerant (bla, bla, bla) political system -- that US officials frequently cite as a model for the Arab world -- why does have to go to such extreme lengths to monitor its own citizens? https://t.co/Q2Xn3g1pZB @sarahleah1 @JamalsNews

This is really really really bad. “It has access to users’ microphones, cameras, calendar and other phone data.” Basically, spyware... https://t.co/vqrATwdLhZ

“..the firm behind ToTok, Breej Holding, is most likely a front company affiliated with DarkMatter, an Abu Dhabi-based cyberintelligence and hacking firm ... DarkMatter is under F.B.I. investigation” https://t.co/83JUkfNe0U

Piece says the app has been downloaded millions of times, but considering this was an intel operation wonder how many of those downloads were from real users and how many were to boost app ratings/perception of legitimacy.

In retrospect...took nation/states a long enough time to get into this business. We really do need some form of new clearance house for this stuff. And you can’t trust the national regulators. https://t.co/WO2ZXqLmFh

ToTok is billed as a secure chat app, but it’s a spying tool used by the UAE government to track every convo, movement, relationship, and image of people who installed it on their phones. https://t.co/BDx73gHLZc

We regret to inform you the duck is a CIA operative https://t.co/jnNMTiEgnF

ToTok, an increasingly popular chat app, turns out to be a spying tool for the Emirati government. Map contacts, location, etc it users. “Unclear whether ToTok allows the Emiratis to record video or audio calls of its users.” https://t.co/Ye72redJ1a

Wait, I thought It spied for China? Maybe it’s a double agent. Wait. ToTok? Tic-tac ? Which are the mints? https://t.co/CXXLLfvKoI

I feel like it's time for verified apps. https://t.co/MSPZVRrSJD

This reporting entailed a ton of work and helped cut off Emirati surveillance of millions, including Americans. If you can’t read it, please consider a subscription to the @nytimes Its journalism like this that I’m so proud and grateful to do. https://t.co/dUHl4CyVru

I’ve been thinking for awhile that we will likely come to see this time in history as a world war. We’re in a cyberpunk timeline now https://t.co/fc255H0t1l

Incredible long con by the UAE.

First they outlawed and blocked WhatsApp, Skype, and other VoIP/chat apps.

Then they launch their own app, that of course EVERYONE instala because there’s no alternative.

This is the future of surveillance. https://t.co/0GRFeQQlO5

If you’re one of the hundreds of thousands of people who downloaded ToTok, delete the app immediately. It’s likely a surveillance tool that can funnel data to the government of the United Arab Emirates https://t.co/L1eaNvzGVH

1. "ToTok" lol
2. The Emirati government is trying to track every conversation, movement, relationship, appointment, sound and image of those who've got the app on their phone
3. The likely firm behind it employs former Israeli military spies and NSA spies https://t.co/VKeVeQuPXl pic.twitter.com/8729wJ8mE1

NEW: the popular messaging App ToTok, one of the most-downloaded in Apple and Google app stores during the last months, is in fact, a sophisticated hacking tool used by the government of the UAE .
W\ @MarkMazzettiNYT @nicoleperlroth https://t.co/YUMHVsRA4C

For all of our military spending, why the HELL are American citizens so consistently vulnerable to:
✅ electronic surveillance
✅ cyberwarfare
✅ information warfare

Our information and communication infrastructure is the 21st century battle space, and civilians are combatants. https://t.co/hz7C0ooTit

So TikTok... glad I never installed that. I’m only selling records and music related business, but still, if a new app shows up you can bet it is there to mine data or worse. In the case of TikTok, worse.https://t.co/GIfthvwoCb

#App#Chat#ToTok
Popular chat app ToTok is reportedly secret United Arab Emirates spying tool
If this app is on your phone, uninstall it nowhttps://t.co/YsbOgihc0P

#totok (and a few others) have always been #spy #apps. Now it’s come to light. Always research when you download apps, if only just to know where you stand. https://t.co/ahif4TuKVM

Citing American officials as sources, the NYT reported that ToTok (not to be confused with TikTok) gives UAE spies access to citizen's conversations, movements, and other personal information like photos. https://t.co/jl9ebonfkP

Looking through the glass front doors & out mirrored back doors of mass societal surveillance technology: When a popular chat app downloaded by millions quietly captures one’s digital life as a subversive Trojan Horse spy tool from the inside out—for free. https://t.co/ykWUEwURt3

It Seemed Like a Popular Chat App. It’s Secretly a Spy Tool https://t.co/jc4GOUHtwt

It Seemed Like a Popular Chat App. It’s Secretly a Spy Tool. https://t.co/YsIjtKm5qA

TikTok and now ToTok -
I mean, from an intelligence point of view, it just makes sense - You get location, videos, personal texts, relationships - a treasure trove of info. https://t.co/OwLgbQ8gvp

It Seemed Like a Popular UAE-made Chat App. It’s Secretly a Spy Tool. Its maker hired Israeli hackers even though the 2 countries were once enemies. https://t.co/MkpG4cZvtm

The #UAE is becoming a cyber powerhouse with ambitions that conflict with our Western interests - Totok is used by the UAE to try to track every conversation, movement, relationship, appointment, sound and image of those who install it on their phones https://t.co/nM3f6MjotM

ToTok is a spying tool according to American officials and a NYT investigation.

“It is used by the UAE to try to track every conversation, movement, relationship, appointment, sound and image of those who install it on their phones.” https://t.co/88NM18Imx8

ToTok, an Emirati messaging app that has been downloaded to millions of phones, is the latest escalation of a digital arms race. It is used by the government of the UAE to try to track every conversation, movement, relationship, appointment, sound & image https://t.co/qTr9IG1pWJ

Delete the Scammy 'ToTok' App, and Use It As a Lesson in Avoiding Spyware https://t.co/whfUQUXDI4 #lifehacker #android

#ToTok is a UAE spying tool, say US officials. Delete it now. https://t.co/bJWGXKekvZ

The popular ToTok app, downloaded millions of times, is actually a spy tool for the UAE government, per a report. It's a mass surveillance tool, capable of monitoring every conversation, movement, relationship, appointment and image of its users. LATEST: https://t.co/436kHtk4eR pic.twitter.com/txwzGt054p