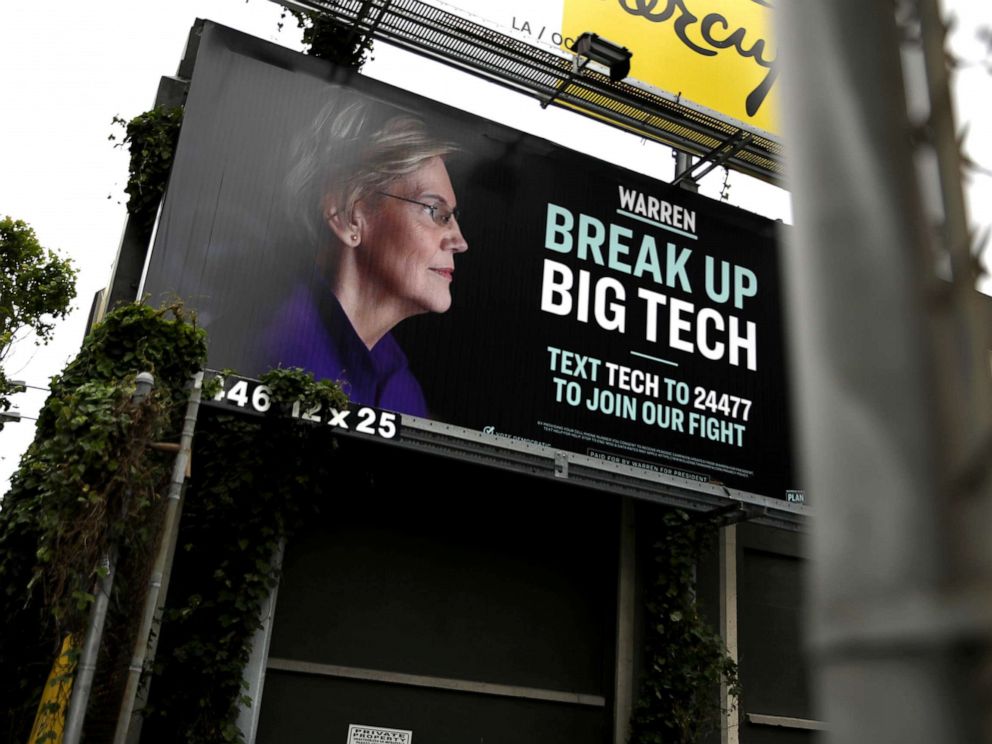 Zuckerberg says Warren as U.S. president would be bad for tech [japantoday.com]

Mark Zuckerberg - Every week I do a Q&A at Facebook where... [www.facebook.com]

In leaked audio, Facebook CEO vows to ‘go to the mat’ to fight government efforts to break up Facebook [thelogic.co]

Facebook’s code of silence has been breached [www.vox.com]

"We're right and [politicians/media] are wrong and yes we care about [issue x] but the media exaggerates things, and no we don't think it's an issue. And now I will make a joke and you will laugh pls" https://t.co/8hJVp2Z2Kh

This is so unbelievably important. And, in case you're wondering, note that she came out with this strong, surprising proposal *right before her big surge*.

Fearless anti-monopoly is good for democracy, and its good politics. https://t.co/iYcBc9n7U0

Not the bombshell people are hoping for. And Zuckerberg isn’t going to slip in an employee open meeting. https://t.co/9c5Qfg3t7s

This is maybe the *least* important bit in this incredible transcript from @CaseyNewton, but it’s nice to hear that Facebook isn’t currently entertaining the brain implant thing. https://t.co/OApOHkbd5m

This is wild. Not necessarily because anything Zuckerberg said here is scandalous. But because Zuckerberg does these company-wide QAs all the time - an important part of FB culture - and he speaks very candidly because he trusts employees won’t leak what he says. https://t.co/stXrGLtOIk

Here are Zuckerberg's thoughts on the leak. To answer some of the conspiracy tweets I've gotten: no, Facebook PR did not give me this audio. I wish! https://t.co/Z3oFgQwKu2 pic.twitter.com/p6Ej8Mb6zF

“[Zuckerberg] joked repeatedly about how he would have been fired several times over the years if he had not negotiated for total control over the company, drawing laughter from his employees.” https://t.co/z5w2dpsiIw

Today we're publishing highlights from two hours of leaked audio in which Mark Zuckerberg rallies Facebook against critics, competitors, and Sen. @EWarren. It's a fascinating look at a company under siege. https://t.co/5Hkkdfma8V pic.twitter.com/N5VYPa8Nn2

The idea that Warren poses an existential threat to Facebook is ... just wrong.

That’s not existential! Facebook would exist and still be by far the biggest social network in the world.

As Zuckerberg said, Warren winning would cost him a lot in legal fees.

Does he have an obligation to shareholders to help spread fake news that helps him beat her?

Hey Mark ??! Cool joke about our size and money! How about we work together on election integrity instead of trying to compete about it. I think that’s what’s best for all of our customers and democracy. https://t.co/jx1VzJ8nlt

There's much more here: on the rocky rollout of Libra, why he refuses to testify in front of most governments, and what employees should tell friends who have a bad opinion of Facebook. We put together a full transcript of his newsworthy remarks here. https://t.co/2qLieQiZ8Q

I'm not afraid to hold Big Tech companies like Facebook, Google, and Amazon accountable. It's time to #BreakUpBigTech: https://t.co/o9X9v4noOm

There’s so much more in the Zuck audio leak but I can’t get over him calling Facebook “existential” https://t.co/DN7lwh76jK

Zuckerberg tries to own his Q&A leaked to @CaseyNewton so it feels less clandestine, but I'd bet regulators will demand he be "unfiltered" with them too https://t.co/QgTWimoW9N pic.twitter.com/BJHJMUbe0w

Yet another thing @ewarren can make a campaign ad about. Facebook, like Wall Street, is scared of her. https://t.co/pMEarscU9a

What would really “suck” is if we don’t fix a corrupt system that lets giant companies like Facebook engage in illegal anticompetitive practices, stomp on consumer privacy rights, and repeatedly fumble their responsibility to protect our democracy. https://t.co/rI0v55KKAi

Tech giants have armies of lawyers and lobbyists working around the clock to protect their interests. Their greed has surpassed ethics and morals. They tried to kill campaign of Tulsi Gabbard in the past.

From @CaseyNewton what we call in the business a barnburner. Mark Zuckerberg is not having any of your breakup DC and will sue you if you make Facebook have an “existential” moment. And yes, there’s audio. https://t.co/MXLFWNssYc

Great get, @CaseyNewton, and I hope more transcripts emerge. A record of FB all-hands from, say, 2013-2018 would be a genuinely valuable contribution to our understanding of the world. https://t.co/1Esq8VRWrA

Zuckerberg mostly stays on script with answers. Interesting comments on Elizabeth Warren. But most interesting is that an employee felt it was worth breaking trust and leaked the audio. https://t.co/eaul10Ori7

facebook doesn’t get to decide what fines it will or will not “entertain” for repeatedly breaking the law on a mammoth scale, and it would be just dandy if the agency responsible for regulating them were interested in reminding them of that https://t.co/CDpnEoIJg6 pic.twitter.com/EvKtsztple

Respect for Zuckerberg move of posting ⁦@CaseyNewton⁩ scoop of his existential crisis chat and providing link. By which I mean the PR person who convinced him to do it. (I’m looking at you ⁦@nick_clegg⁩.) https://t.co/gLUFe8pvUn via ⁦@nytimes⁩

A good question for him is whether in addition to using his billions of dollars and vast army of lawyers to try to win political battles, would he use Facebook’s control over news distribution to try to slant election results in favor of candidates he likes better? Why not?

One major danger for those who think Favebook is being held accountable is Facebook’s ability to deceive lawmakers and the public into believing they’re seeing under the hood, unvarnished truth when they’re actually getting a peek into a controlled environment. https://t.co/H0X90VhuyI

Mark Zuckerberg admitting he is terrified of Elizabeth Warren is better than any endorsement ? https://t.co/HTwNFE6cdb

Zuck: "You have someone like Elizabeth Warren who thinks that the right answer is to break up the companies ... if someone’s going to try to threaten something that existential, you go to the mat and you fight." I am sure her campaign appreciates the ad. https://t.co/Ceywy6OehP

Zuckerberg says, go ahead, read the transcript to get "an unfiltered version of what I'm thinking."

But -- is Mark Zuckerberg ever really, really unfiltered? https://t.co/bgOxWlca9V

In two hours of audio leaked to The Verge, Mark Zuckerberg rallies Facebook employees against critics, competitors, and the US government. Here are some highlights:https://t.co/SXEByFkOJx pic.twitter.com/QDpF1dT71f

The telling thing is they won’t “go to the mat” and “fight” against the “existential” threat of the corrupt white supremacist predator president that their board member went on national TV to endorse. https://t.co/5KkBvkkjBf

Ironically, this private, leaked recording amounts to the best interview Mark Zuckerberg has ever done. https://t.co/lMV8wUsksp

If Elizabeth Warren were right that Facebook stifles innovation and should be broken up, startup investors would agree with her. They both (a) understand startups, and (b) have the most to lose if incumbents kill the up and coming ones. But on the whole they don't agree with her.

We have to fix a corrupt system that lets giant companies like Facebook engage in illegal anticompetitive practices, stomp on consumer privacy rights, and repeatedly fumble their responsibility to protect our democracy. #BreakUpBigTech https://t.co/c0qWuRb9NN

Meta-take: The leak is more important than the content.
Facebook has been holding weekly all-hands for thousands of employees for years. Very little has gotten out until now. https://t.co/DgsKXIl5V0

Facebook CEO Mark Zuckerberg told employees he would fight a legal battle against Elizabeth Warren's ambitions to break up big tech, according to leaked audio. https://t.co/wikGLgHWk2

Facebook’s ''I Voted'' Button Could Be Trump’s Secret Turnout Weapon In 2020 https://t.co/s6HDHbb6MT

I don't know why anyone thinks Facebook is a problem or why Zuckerberg's comments about how @ewarren presents an 'existential threat' to the company matters. https://t.co/AFRMkcgZM8

“As Facebook’s user base morphs into the Trump coalition — older, less-educated, and more Republican — the platform's get-out-the-vote efforts could become a powerful element of the president's reelection campaign” https://t.co/66uXUy00BE

Civic participation is what we all want. But… https://t.co/ZUdUbkPj7i

It's so funny; social media platforms for years sponsored Get-Out-The-Vote efforts, celebrated by press & liberals who assumed those efforts would of course help Democrats

Now someone thinks *maybe* such an effort might boost Republicans, so it's SCARY https://t.co/wlSEneDbsM pic.twitter.com/s4w77Lvi77

Zuck is determined once again to elect the fav candidate of the uber rich, Trump.

FB is "older, less-educated, and more Republican" so the R base has a majority.

It is low IQ and it encourages misinformation and lies.
https://t.co/Dscxsh0Tpw

Facebook’s "I Voted" Button Could Be Trump’s Secret Turnout Weapon In 2020 https://t.co/7Jl06bRJZK

An interesting question that Facebook doesn't want to grapple with: Can its "I Voted" feature shift a presidential vote as its user base becomes older and more conservative? https://t.co/SmbP0jp4BF

Facebook’s "I Voted" Button Could Be Trump’s Secret Turnout Weapon In 2020 https://t.co/cGhzUrggUe

As Facebook's audience skews toward the Trump coalition, is its get-out-the-vote power a Trump campaign asset? https://t.co/LVdSOoZnIt

This is a war between Capital and Labor.

Pete Buttigieg: "There are a lot of natural monopolies in tech" https://t.co/YQ7Pmvgtn0

Buttigieg argued, “the more interesting question is about power and how much the concentration of economic power turns into concentration of political power, which is the big failure of neoliberalism.” https://t.co/6Iu6gMQ75t

Pete Buttigieg doesn't like Elizabeth Warren's plan to break up massive tech companies like Facebook and believes tech has "natural monopolies" within it, whatever that means: https://t.co/ktjz2GgBr7

MUST READ from @Bencjacobs on how @PeteButtigieg is at war with @ewarren while undermining the reputation of Rhodes Scholars.

Pete Buttigieg: "If you take Twitter, and cut it in half, you’ll just get two Twitters — one will be good and the other will go away.”https://t.co/Tp8B37hkTS

"I choke a little bit on the idea that’s coming from at least one candidate [that] if a company reaches a certain scale, just break them up."https://t.co/YQ7Pmvgtn0

Here are Zuckerberg's thoughts on the leak. To answer some of the conspiracy tweets I've gotten: no, Facebook PR did not give me this audio. I wish! https://t.co/Z3oFgQwKu2 pic.twitter.com/p6Ej8Mb6zF

Zuckerberg tries to own his Q&A leaked to @CaseyNewton so it feels less clandestine, but I'd bet regulators will demand he be "unfiltered" with them too https://t.co/QgTWimoW9N pic.twitter.com/BJHJMUbe0w

The fact that Mark Zuckerberg is shitting himself so hard over just the possibility of Elizabeth Warren’s presidency is all the more reason to vote for her. https://t.co/RXNf53Zhrg

Silicon Valley donors "are begrudgingly coming around to admit that she’s the best answer because Bernie is crazy,” said a California based money manager who spoke on the condition of anonymity. https://t.co/LI225IJ6WE

A Facebook employee has broken the company’s code of silence. It’s amazing it stayed intact this long. https://t.co/jQEki2xuck

Facebook’s code of silence has been breached. It’s amazing it stayed intact this long. https://t.co/ORoLuaTRuB via @voxdotcom

Part of today’s Facebook leak may have come from event for company interns https://t.co/mfoE9D1DeW

One of the leaked recordings of Facebook discussions appears to be from an event for interns, per @pkafka. https://t.co/58jxRH13VU

Zuckerberg worrying about Sen. #Warren, the site’s “I VOTED” BUTTON could help tip the election for the president... #MOG#Resist #Resisters

Facebook’s Voter Turnout Machine Could Be Trump’s Secret Weapon In 2020 https://t.co/Ts7gaBRcJi via @BuzzFeedNews

We also know Facebook can mobilize turnout with a UI tweak. https://t.co/ytRoRBjEF3

We know that Facebook's voter turnout efforts can push hundreds of thousands of American voters to the polls. But the company just won't say who they vote for. https://t.co/2Lw9l1zD5r